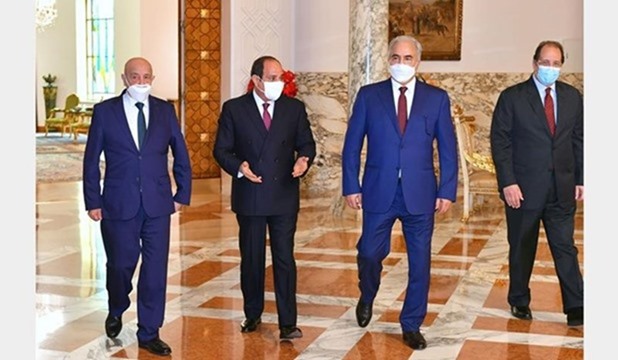 During the meeting, attended by head of Egypt's General Intelligence Service Abbas Kamel, President Sisi was briefed on the latest developments in Libya and the efforts being exerted by all parties to implement the ceasefire, Presidential Spokesperson Bassam Rady said.

Sisi was also posted on the Libyan efforts to push forward the peace process under the auspices of the United Nations.

President Sisi lauded efforts exerted by Speaker of the Libyan House of Representatives Aguila Saleh to unite executive and legislative institutions in Libya.

The president also hailed Libyan military, led by Haftar, over confronting terrorism and committing to ceasefire.

Sisi also called on all Libyan parties to work on reaching a solution for the Libyan crisis according to the outcome of the Berlin Summit and the Cairo Declaration.

During the meeting, Sisi was briefed on the latest developments in Libya and the efforts being exerted by all parties to implement the ceasefire.

Aguila and Haftar hailed Sisi and Egypt’s crucial role to entrenching peace and stability in Libya via supporting the Libyan institutions to combat terrorism and extremism groups and encouraging parties to return to the negotiating table to reach a political solution to the crisis.