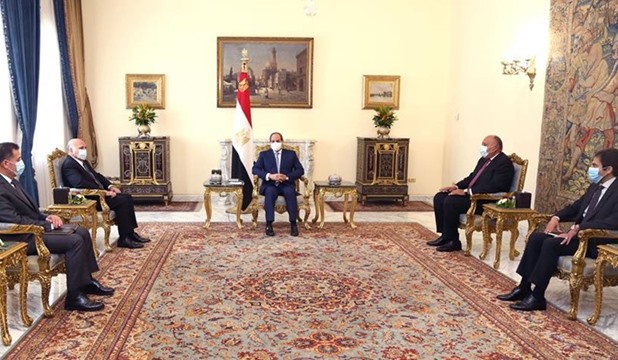 The Iraqi Minister of Foreign Affairs conveyed to the President a message from the Iraqi Prime Minister Mr. Mustafa Al-Kadhimi, in which he praised the historical fraternal ties between the two brotherly countries and affirmed Iraq's appreciation for the Egyptian efforts in support of its affairs at all levels. In the message, Mr. Al-Kadhimi stressed that Iraq is looking forward to strengthening cooperation frameworks with Egypt -whether at the bilateral level or within the framework of the tripartite cooperation mechanism with Jordan- in order to benefit from the inspiring, successful Egyptian experience in the field of development projects and to transfer them to Iraq, especially in the fields of infrastructure and electric power.

The Iraqi Minister of Foreign Affairs also commended the Egyptian role in support of Iraq, which represents a strategic depth for his country at the Arab, African and global levels, especially with regard to confronting common challenges, chiefly combating terrorism and achieving security, stability and development.

On his part, President El-Sisi asked that his greetings be conveyed to his two brothers, the Iraqi President Mr. Barham Salih and the Iraqi Prime Minister Mr. Mustafa Al-Kadhimi. His Excellency stressed Egypt's mutual keenness to push the frameworks of cooperation with Iraq towards new and diverse horizons whether on the bilateral or tripartite levels with Jordan. President El-Sisi also affirmed the constants of the Egyptian policy with regard to supporting Iraq and strengthening its Arab national role. President El-Sisi made it clear that Egypt supports what would achieve Iraq's interests at various levels and helps it overcome all challenges, combat terrorism, and maintain its security and stability.

The meeting also witnessed an exchange of views on a number of Arab and regional issues of common interest. It was agreed on the need to intensify coordination to overcome the challenges facing the region, in a way that fulfills the aspirations of its peoples to achieve security, stability and development.