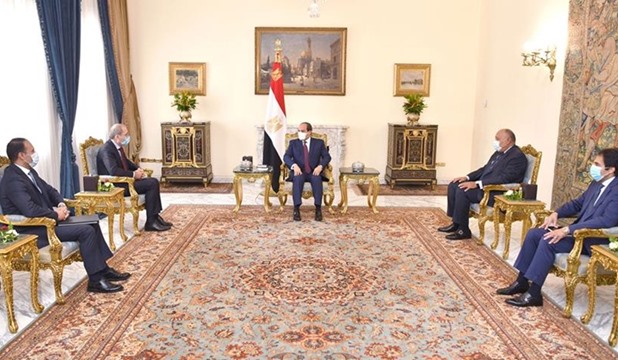 President Abdel Fattah El-Sisi received on Tuesday, 13 October 2020 Minister of Foreign Affairs of the Republic of Jordon. The President asked that his greetings be conveyed to his brother, Jordanian monarch, King Abdullah II bin Al-Hussein, expressing his aspiration to develop further coordination between the two countries at various levels, whether bilateral or trilateral with the Republic of Iraq, especially in light of the growing challenges that arise and the strong historical ties and fraternal relations both Egypt and Jordan at the official and popular levels.

For his part, the Jordanian Minister of Foreign Affairs expressed his honor to meet the President, conveying to His Excellency the greetings of His Majesty King Abdullah II bin Al-Hussein and stressing Jordan's keenness to continue intensive coordination and consultation with Egypt at all levels in light of the important and central role played by Egypt role in the region, in a way that contributes to facing common challenges that the Arab nation is going through.

The meeting discussed the latest developments in the region, especially the peace process in the Middle East. It has been agreed that international efforts should be intensified to settle the Palestinian cause as per the resolutions of international legitimacy with the aim of unlocking the peace process and resuming negotiations.

The developments in the Libyan situation were also discussed; the President emphasized that the main goal is to stabilize the current situation according to the announced lines so as to reach a comprehensive solution for restoring stability and security in Libya through the political track, the results of the Berlin Conference, Cairo Declaration and elections. His Excellency stressed that joint coordination, willpower, and the common Arab positions would impose the outlines of the Arab national security.