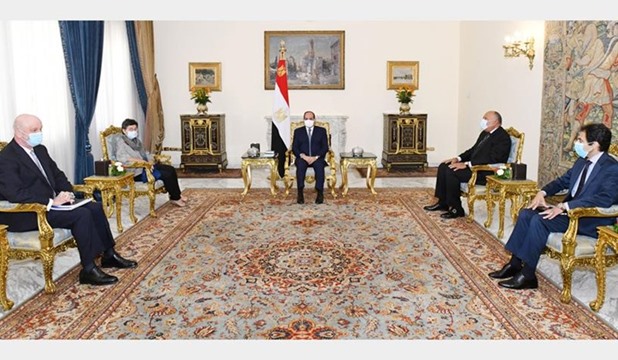 The President asked that his greetings be conveyed to His Majesty King Felipe VI of Spain and Spanish Prime Minister Mr. Pedro Sánchez. His Excellency affirmed Egypt’s aspiration to promote the close bilateral cooperation in order to improve bilateral relations and maximize the use of the potentials and opportunities available in both countries in all fields, especially investment, trade, energy and tourism.

Ms. Arancha González conveyed the greetings of the King of Spain and the Spanish Prime Minister to President El-Sisi. She expressed her country's appreciation for the leadership and people of Egypt, stressing the deep friendship and extended ties binding the two countries. She also highlighted her country's aspiration to advance and develop bilateral relations between the two sides in various fields. She stressed the importance of ensuring intensive coordination and consultation with Egypt, in light of its pivotal and balanced role in laying the foundations of stability in the Middle East and the Mediterranean region, its effective efforts in combating terrorism, extremist ideology and illegal immigration, and the fact that Egypt hosts and provides full care for a large number of refugees from various countries, which Europe highly appreciates.

The meeting witnessed an exchange of visions and views on ways to develop bilateral relations, including security and military issues, as well as an exchange of experiences regarding dealing with the coronavirus pandemic. In this regard, the Spanish Minister praised Egypt’s adopted measures amid the coronavirus crisis at all levels.

In addition, consultations were held on regional and international issues of common interest, including illegal immigration, combating terrorism and extremist ideology. Moreover, developments in the Palestinian cause and the Renaissance Dam issue were discussed. A consensus was reached on the importance of continuing the regular intense consultations between the two countries to overcome the challenges facing the region, in a way that fulfills the aspirations of their peoples and achieves security, stability and development.

With regard to the Libyan crisis, Ms. Arancha González praised the Egyptian efforts aimed to stabilize the current position on the ground according to the announced lines, which contributed positively to taking control of the situation in Libya. President El-Sisi emphasized that the main goal is to restore stability and security in Libya through the political track and the outcomes of the Berlin Conference, Cairo Declaration, and elections. He stressed that the attempts to undermine states’ entities and national institutions in the region allow the threat of terrorism to spread.