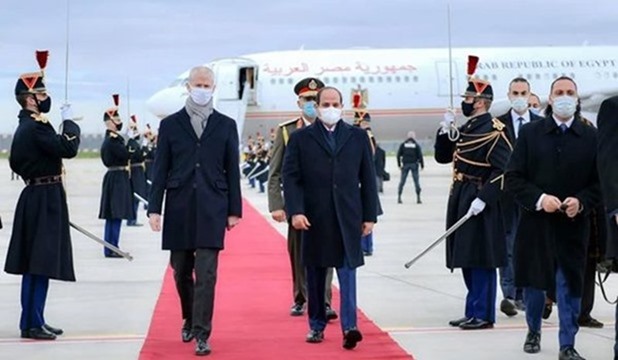 The Spokesman for the Egyptian Presidency stated that the visit reflects both countries’ keenness to strengthen the strategic relations between them in the coming period. During the visit, a summit meeting is to be held between President El-Sisi and President Macron that will address all aspects of the bilateral relations between the two countries as well as joint political coordination on regional and international issues.
The Spokesman stated that meetings will be held between President El-Sisi and the French Prime Minister, a number of French ministers and senior officials, and the Presidents of the French National Assembly and the Senate.
These meetings aim to present Egypt’s vision regarding the regional crises and how to deal with them, especially those related to the Eastern Mediterranean and the Middle East. They also aim to discuss the horizons of increasing joint cooperation between the two countries and strengthening bilateral relations, especially in the investment and trade fields, in light of Egypt's efforts to encourage and attract foreign investments to be part of the mega national projects within the framework of the comprehensive development process in Egypt.

Addressing a joint press conference with Sisi at the Elysee Palace, Macron said the visit is a clear proof of the profound relation between Egypt and France. He, also, pointed out to his visit to Cairo in January 2019 when president Sisi received him and agreed to meet
again in Paris.

The gathering was organized during a joint press conference between President Sisi and his French counterpart Emmanuel Macron. The Egyptian expatriates were carrying Egyptian flags and pictures of President Abdel Fattah El-Sisi, chanting “Long Live Egypt,” and “We love you, Sisi.”

In addition to this, they also played the Egyptian national anthem and other songs talk about patriotism.


Parly expressed her country's aspiration of enhancing military and security cooperation with Egypt as it is the cornerstone of security and stability in the Mediterranean area in light of
the important role Egypt plays in achieving regional balance.

Talks covered the latest developments of regional crises as well as efforts to fight terrorism and extremist organizations.

President Abdel Fattah El-Sisi met Monday afternoon with Anne Hidalgo, the Mayor of
Paris, at the headquarters of the mayor of Paris, said Egyptian Presidential Spokesperson Bassam Rad in a statement.


The meeting has tackled Egypt’s experience in major national projects over the past years, exploring cooperation opportunities between Paris, Radi added.


Anne Hidalgo expressed her country’s aspiration for joint cooperation with the Egyptian government and the Cairo governorate, especially in the cultural and service sectors, Radi said.


President Sisi dicussed the size and diversity of the major national projects underway in Egypt, which provides multiple areas for joint cooperation in the newly-built cities, especially the new administrative capital, besides the tourism and antiquities sector, Radi continued, noting that President focused on ways of strengthening cooperation at the economic and
trade levels.


The meeting also dealt with a number of regional and international issues of mutual concern, especially combating terrorism and extremist ideology.

Sisi on offensive cartoons: religious values, others’ feelings shall be considered

In a press conference with French President Emmanuel Macron at the Elysee Palace on Monday, Sisi said freedom of expression should not lead to hurting the feelings of over 1 billion Muslims worldwide.

“In Egypt, our stance has been clear, which is supporting with full decisiveness against and condemning any terrorist act on any ground,” Sisi said.

“This is something we have condemned through the Egyptian Foreign Ministry and Al-Azhar, as a religious institution that is colored by moderation and that presents Islam as a good and moderate religion”.

“But religious values, if we admit that they are revealed by the great creator, Almighty God, are sacred and are above all values”.

Macron, for his part, said the cartoons are not a message from France to Muslims but
rather a form of expression from a reporter.

Macron said that these acts comply with the law that has been chosen by France’s people, saying that many people opposing these cartoons respond to them peacefully.

Macron said, in France, we see that nothing can be above man and respect for the human person’s dignity, Macron said, adding it is the contribution of the philosophy of the Enlightenment.

In France, a journalist, a cartoonist, writes and draws freely. And the President nor any body ever does tell him what to do.

The Al-Azhar Observatory for Combating Terrorism has praised Egyptian President Abdel-Fattah El-Sisi for speaking out against profaning religious symbols and beliefs during a press conference held earlier today with his French counterpart Emmanuel Macron in Paris.

In a statement on Monday, the observatory expressed its appreciation for the president stressing the necessity of stopping attacks against religious symbols under the slogan of
freedom of expression. It also praised the president for emphasising that expressing one’s opinion cannot be a justification for hurting the feelings ofothers.

The statement also lauded El-Sisi for asserting Egypt's "firm" condemnation of all terrorist acts and stressing that Muslims respect the followers of all religions.

The observatory said that El-Sisi’s remarks come at a critical time when violent crimes against Muslims in Europe are on the rise.

The Egyptian President, who is currently on a visit to France, confirmed during the briefing
the need to work jointly to promote tolerance, moderation and co-existence among religions, civilisations and peoples.


Commenting on cartoons of the Prophet Muhammad in France, which have recently sparked anger across the Muslim world, El-Sisi said “religious values” should be considered alongside “humanitarian values,” affirming that these drawings hurt the feelings of millions of Muslims worldwide.

“It is important that, when we express our opinion, that we do not decide that religious values be violated for the sake of humanitarian values,” he added.

“The rank of religious values is much higher, because humanitarian values are values that we
have made and we can update or regulate,” El-Sisi stressed.

Macron affirmed that such caricatures are forms of individual expression and do not represent France.

Egyptian President Abdel Fattah al Sisi thanked his French counterpart Emmanuel Macron
for his warm reception and hospitality during his visit to France, which started Sunday.

On his official twitter account, Sisi said “I thank French President Emmanuel Macron for the warm reception and hospitality during my visit to France. The relations between our two countries are characterized by diversity in many fields. Today, we discussed ways to strengthen bilateral relations at various levels.

“We exchanged visions on our common issues, and the need to intensify meaningful consultation facing challenges to consolidate peace and stability in the region.” He added.