In a new issue of the State Information Service: "Al-Dostour" in a small booklet for everyone 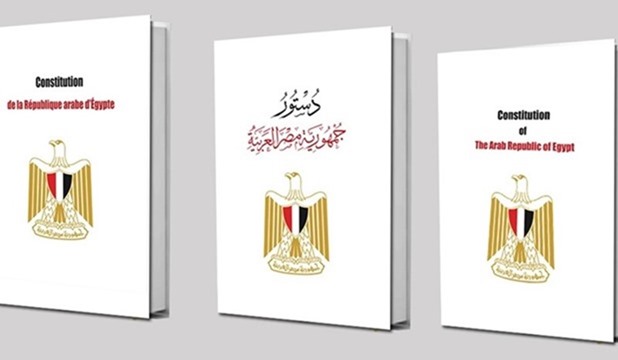 In an elegant print, and a graceful size that can be easily acquired and used when needed, the State Information Service (SIS) issued a booklet that includes the text of the Egyptian constitution according to the latest amendments.

Diaa Rashwan, the Egyptian journalist, politician and the current Chairman of the State Information Service, said that the State Information Service has printed hundreds of thousands of copies of the constitution booklet, and made it available to all members of the House of Representatives and Senate, judicial bodies, law schools and the police academy, in addition to students of schools, universities, public libraries, all government agencies and all citizens. He pointed out that spreading the culture of interest in the constitution’s texts among all categories of citizens is part of spreading political and legal awareness, on the basis that the constitution is the supreme document, which includes defining a clear framework for the national identity, the philosophy of political, economic and social systems in Egypt, as well as the duties and rights of citizens. This is in addition to the institutions of government, their duties, the relationship between them, and other foundations that regulate the affairs of life and society. There is no doubt that the citizens’ knowledge of all this is the starting point for spreading the principles of respect and the rule of law by individuals and state institutions alike.

He, also, confirmed that SIS issued translated copies of the constitution’s content into the English and French languages and made them available to researchers as well as the public through the Egyptian embassies abroad, foreign diplomatic missions in Egypt, foreign correspondents and visitors to Egypt from parliamentary delegations, in particular.

The State Information Service (SIS) has already started distributing thousands of copies to all governorates of Egypt and social, cultural and educational institutions. It is also ready to provide the copies needed by any party interested in disseminating legal and constitutional culture among citizens and youth in particular.