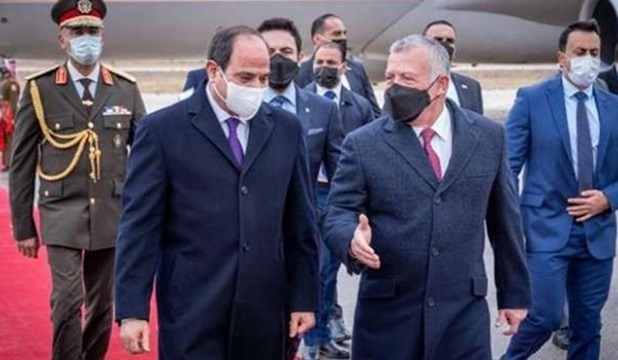 President Abdel Fattah El-Sisi heads to Amman, Jordan, for an official visit, at the invitation of King Abdullah II bin Al-Hussein of the Hashemite Kingdom of Jordan.

The Spokesman for the Egyptian Presidency stated that President El-Sisi is expected to discuss with His Majesty King Abdullah II ways to strengthen the close bilateral relations between the two brotherly countries. It is also expected that they would consult and exchange views on various Arab and regional issues of common interest, thus ensuring regular coordination and concerted efforts to safeguard Arab national security.

President Abdel Fattah El-Sisi arrived in Marka International Airport, Amman, on an official visit to the Hashemite Kingdom of Jordan. President El-Sisi was received by His Majesty King Abdullah II, during which the reception ceremony was held, the two national anthems were played, and the 21-gun salute was performed.

The Prime Minister, the President of the Royal Hashemite Court, the Deputy Prime Minister and Minister of Foreign Affairs, the Advisor to the King for Policies, the Minister of State for Media Affairs, Head of the Honorary Mission, the Director of the General Intelligence Department, and a number of officials also received President El-Sisi.

The President’s accompanying delegation included the Minister of Foreign Affairs, the Director of the General Intelligence Service, the Presidential Chief of Staff, the Commander of the Republican Guard, and the Egyptian Ambassador to Jordan

As stated by the Spokesman for the Egyptian Presidency, His Excellency President El-Sisi and King Abdullah held closed bilateral talks, followed by an extended session that included the members of both countries’ delegations.

His Highness King Abdullah said that both the government and people of Jordan welcome His Excellency’s visit to Jordan. King Abdullah stressed the distinguished bilateral relations between Egypt and Jordan and praised the efforts exerted by President El-Sisi in promoting the joint Arab action when it comes to facing the current crises and challenges. His Majesty added that Egypt’s role in this regard is a good example to be followed to maintain stability and enhance development, economic and social conditions across the Arabic world.

In addition, the King Abdullah expressed his appreciation for Egypt’s support to Jordan in various issues and the contributions of the Egyptian community in various sectors and their role in supporting Jordan’s developmental achievements. His Majesty affirmed his county’s keenness to deepen bilateral relations with Egypt across all levels in a manner that would realize the common interests for both brotherly nations.

The Spokesman also added that His Excellency President El-Sisi expressed his appreciation to his brother the King of Jordan for the warm reception and generous hospitality. The President stressed Egyptians and Jordanians share bonds of brotherhood and affection as well as common history and destiny. His Excellency expressed his keenness to strengthen bilateral relations with Jordan in all fields.

The President also praised the current coordination level between both brotherly nations on issues of common interests and their keenness to reinforce the joint Arab action to confront the many challenges currently facing the Arab nation.

The Spokesman also added that the talks addressed means to enhance bilateral relation between both countries in the field of trade, development, investment cooperation as well as security cooperation and information exchange. Moreover, various regional and international issues of common interest have been presented. They agreed on the importance of strengthening their efforts to mobilize the international community in order to reach political settlements to the current crises facing some of the region’s countries and undermining terrorism and extremism, thus restoring security and stability and preserving the territorial integrity of these countries as well as their peoples’ wealth.

During the meeting, they exchanged views regarding the Egyptian-Jordanian efforts that aim to enhance the tripartite cooperation mechanism with Iraq. Both parties agreed on intensifying joint coordination toward implementing projects and development plans among the three countries in a manner that would realize the hopes of the people: progress, prosperity, peace and stability.

As for the recent developments regarding the efforts exerted in reviving the peace process and the negotiation path of the Palestinian cause, His Excellency President El-Sisi stressed Egypt’s tireless efforts regarding this cause. President El-Sisi emphasized on the importance of always helping the Palestinian people regain their legitimate rights, have their independent state as per the international legitimacy references.

King Abdullah expressed his appreciation for Egypt’s relentless efforts in supporting the Palestinian cause, as a continuum of its historical and unwavering role aimed to reach a fair and comprehensive solution to the Palestinian cause. His Majesty also praised Egypt’s efforts to ensure calm in the Gaza Strip and to enhance the current humanitarian, living and economic conditions there in order to complete the reconciliation process and achieve political consensus among all Palestinian factions and powers.

Finally, they agreed to continue intensive coordination and consultation between both sides to unify the Arabic and international efforts and to effectively take actions in the coming period for reactivating the international mechanisms of peace process negotiations and overcoming the previous challenges. This is to be achieved in parallel with the national reconciliation efforts, while building trust among all Palestinian parties in order to enhance the political path toward the desired peace – taking into consideration all of the current factors inducing change on regional and international levels.

The Spokesman for the Egyptian Presidency stated that Jordan’s Prime Minister welcomed President El-Sisi in Jordan. His Excellency expressed Jordan’s profound appreciation for Egypt at the official and popular levels and its pride in the extended ties between the two brotherly countries. The Prime Minister of Jordan also praised the comprehensive development and mega national projects being implemented in Egypt, stressing his country’s aspiration to benefit from Egypt's development efforts through the exchange of experience and joint investment.

The President expressed his appreciation for the warm welcome, praising the strong fraternal relations between Egypt and Jordan which have been recently fostered. President El-Sisi expressed Egypt’s aspiration to deepen and strengthen its ties with Jordan in a way that contributes to achieving the interests of the two brotherly countries and peoples, especially at the economic and trade levels, bilaterally or within the framework of the tripartite cooperation mechanism with Iraq.

The President also appreciated the efforts made by the Jordanian government for their great concern for the Egyptian community in Jordan.

The meeting addressed the overall bilateral relations between the two countries; the economic aspects were strengthened and trade exchange was enhanced in a way that would live up to the robust political relations and historical ties between the two brotherly peoples. Promoting cooperation between the competent health and medical authorities in both countries with regard to facing the repercussions of the coronavirus pandemic, was further emphasized.

During the meeting, the latest developments of the situation in the region, especially in Syria, Libya, and Yemen, were presented and views were exchanged on efforts to combat terrorism and extremist ideology. Egypt’s President and Jordan’s PM agreed on the importance of intensifying coordination and exchanging expertise and information between the competent authorities on both sides to face the challenges imposed by this phenomenon on the regional security at large.