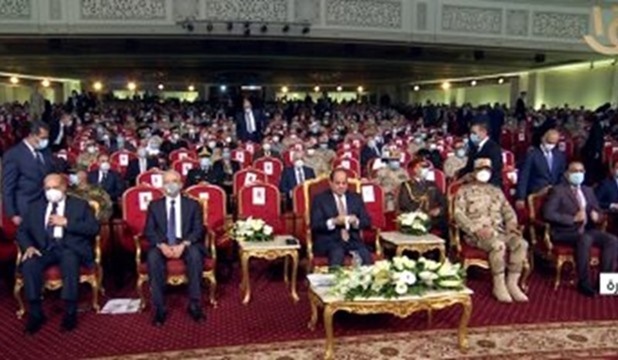 President Abdel Fattah El Sisi arrived at Al Manara International Conference Center in New Cairo to attend an educational seminar, the 33rd organized by the Armed Forces. Themed "If It Were Not For Them, We Would Not Be Here", the seminar is organized to mark Martyr's Day in Egypt.

Following the performance by a choir of children and young people, President Sisi honored a number of families of martyrs and those injured in military operations during the 33rd Armed Forces seminar which marks the celebration of the Martyr's Day. Sisi honored the name of Brigadier General Mostafa Ahmed Abdel Meguid Abeido, who was martyred during an operation against a terrorist hideout in Sinai. His wife, daughter and son received the honorary shield. The president also honored the name of Captain Saeed Hamdy, who breathed his last during a military operation in Bir el Abd in northern Sinai. His honorary shield was received by his father and mother at the seminar.

Sisi also honored the name of Captain Wessam Mansour Mohamed Amin who was shot dead during a security patrol in Sinai. The president also honored the names of Lt Sharaf Bassam Nahij Ibrahim who was martyred during a confrontation with terrorist elements in El Tofaha checkpoint in Sinai. Also, the names of Sergent Ahmed Abdel Mawgood and Corporal Ehab Yousri and Mohamed Refaat Hegazy among others were honored by the president.

In recognition from the state of the sacrifices doctors made and risks taken during the Covid-19 pandemic, President Sisi honored Dr Ahmed Mady Abu Gheneima, who died of infection of coronavirus in one of the isolation hospitals. Sisi also honored Dr Mahmoud Samy, who lost sight in both eyes after suffering from high blood pressure that affected the ophthalmic artery, as a result of intensified work shifts in Balteem isolation hospital.

After honoring the families of the martyrs and doctors, President Sisi delivered a speech in which he asserted that if it were not for this precious blood of the martyrs, Egypt would not have been abled to enjoy stable atmosphere and move ahead towards achieving a comprehensive development across the nation. After Sisi's remarks, the seminar was concluded with the national anthem.