Giant ship "Ever Given" freed, refloating underway at Suez Canal 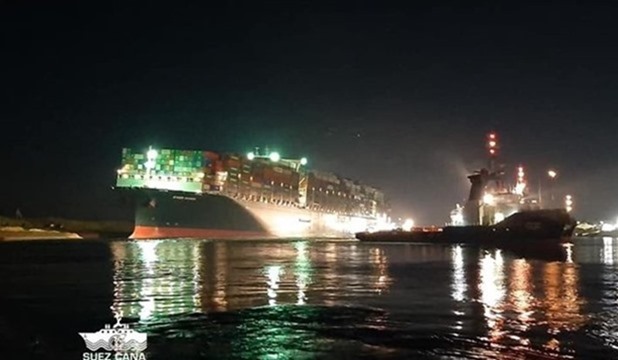 A giant container ship, that has been blocking the Suez Canal since Tuesday, was freed and successfully started refloating, said Chairman of the Suez Canal Authority (SCA) Osama Rabie Monday.

The course of the ship has been adjusted by 80 percent, with the rear pulled away from the shore by about 102 meters, Rabie explained.

Efforts should resume at 11.30 a.m. to further correct the position of the vessel to stand in middle of the waterway, he made it clear.

Navigation through the canal would be open to traffic once the ship is completely refloated and moved to the waiting area, Rabie assured.

The mega vessel, "Ever Given", will then be technically examined, he said.

Ever Given is one of the largest container ships in the world. It is a 220,000-ton mega ship nearly a quarter-mile long with a 20,000 container capacity.

The ship completely blocked the canal which is home to as much as 12% of the world’s seaborne trade, and caused a traffic jam with hundreds of ships waiting to enter the Suez.