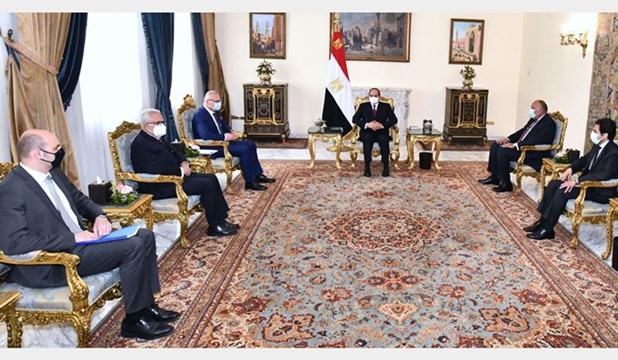 
The Spokesman for the Egyptian Presidency stated that President El-Sisi stressed the historical and friendly relations between Egypt and Croatia and Egypt’s aspiration to strengthen the mechanisms of bilateral cooperation at various levels.


His Excellency affirmed Egypt’s keenness to enhance trade exchange and develop economic cooperation to be in line with the distinguished political relations between the two friendly countries.


These efforts are to be made in light of the major development projects being implemented in Egypt that provide huge investment and industrial opportunities.


For his part, Dr. Grlić Radman expressed his honor to meet with His Excellency, asserting the keenness to continue coordination and consultation between the two friendly countries in various fields.

He further expressed his aspiration to develop and strengthen the relations Croatia has with Egypt.


He stressed Egypt’s ancient civilization and history and pivotal role under the President’s able leadership who seeks to maintain stability and security in the Middle East and Africa.


In the same vein, Dr. Grlić Radman praised Egypt’s successful efforts aimed to stop the threat of illegal immigration to Croatia and Europe.


The Spokesman stated that the meeting discussed ways to enhance bilateral relations, particularly at the economic, investment, and trade levels.

Several regional issues of mutual interests were also touched on in the meeting, foremost of which is the Libyan issue.

The importance of concerted efforts to support the current political path was emphasized.


It was added that the political path aims to safeguard the nationhood and the country’s national institutions and thence hold elections at the end of this year.


Views were exchanged on the issue of illegal immigration.

In this context, the President asserted Egypt’s keenness to combat this phenomenon, highlighting the Egyptian successful efforts to address the issue of the flow of refugees across the Mediterranean.

As part of its responsibility toward its citizens and the security of its partners, Egypt attaches importance to this issue, the President added.

Hence, His Excellency underscored the significance of dealing with the migration issue within a framework of shared responsibility and not only focusing on security solutions, but also addressing the roots of the economic and development problem in the source countries.


Egypt, as indicated by the President, hosts about 6 million refugees of different nationalities, including Arabs and Africans, who enjoy all basic rights and have jobs.


Croatia’s Minister of Foreign and European Affairs expressed his country’s appreciation for the Egyptian efforts to achieve security and stability in its region.


He further asserted his keenness to continue cooperation with Egypt at various levels to address the challenges facing the two shores of the Mediterranean.


In this context, Dr. Grlić Radman praised Egypt’s efforts to promote dialogue between African, Arab, and the European Union countries.

He noted that Croatia is keen to support Egypt’s position and have it adopted in the European Union, in light of the direct relationship between the security of Europe and the situation in the Middle East and North Africa.