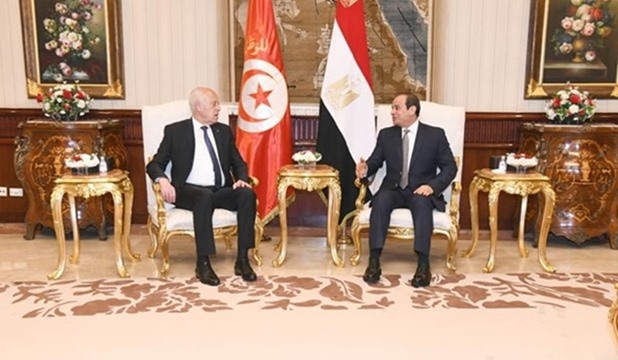 The national anthems of Egypt and Tunisia were played.


Senior Egyptian officials were also present at the ceremony of receiving the Tunisian president.

President Abdel Fattah El Sisi asserted on Saturday Egypt’s keenness to exert more efforts to propel frameworks of bilateral cooperation with Tunisia at all levels, especially with regard to promoting channels of effective communication between the two sides at the economic level, maximizing trade exchange, and boosting joint investments.

Cairo is also keen to increase consultations with Tunis on various regional issues of common interest, especially in light of Tunisia's current membership in the UN Security Council, Sisi said during his meeting with Tunisian President Kais Saied at the Ittihadiya Presidential Palace in Cairo.

The Tunisian president said his country appreciates its close and distinguished ties with Cairo at both the official and popular levels, praising what has been locally achieved by Egypt over the past few years in terms of security, stability and development, which he said has helped Cairo restore its pioneering and effective role at the regional and international levels.

Such steps will have positive future effects on joint African and Arab action, efforts to reach political settlements to existing crises in the region, as well as on pushing forward efforts of regional economic integration, Saied said.

The Tunisian leader also asserted his country’s keenness to activate frameworks of cooperation, and mechanisms of consultation and coordination with Egypt at all levels, both with regard to bilateral topics as well as regional and international issues of mutual concern.

The meeting witnessed discussions on ways to enhance Egypt-Tunisia cooperation, and explore new ways and horizons for cooperation, especially in the fields of economy, trade and investment exchange, Presidential Spokesman Bassam Rady said. The meeting also touched on the security file and information exchange, particularly in light of the several common challenges encountered by the two countries, topped by the fight against terrorism and extremist ideology. In this regard, the two sides agreed on the need to promote security cooperation and information exchange. Meanwhile, the two leaders agreed on the need to intensify joint coordination on the Libyan issue, given that both Egypt and Tunisia share extended borders with Libya, which makes the continuity of the Libyan crisis directly affecting the national security of the two countries. On that score, Sisi and Saied welcomed the formation of the new Libyan executive authority. The agenda of the meeting also included a number of other regional files of mutual interest, especially that of the Grand Ethiopian Renaissance Dam, about which President Sisi reviewed the latest developments. The Tunisian president appreciated the sincere efforts made by Egypt to reach a fair and comprehensive agreement with regard to the rules for filling and operating the dam to preserve its historical water rights of the River Nile. A joint press conference between the two presidents was held at the end of their talks.

“Today, I stood before the grave of the leader, Gamal Abdel Nasser, mourning his pure soul and remembering his stances and virtues,” Saied said in a message he wrote in the visiting book of the grave.

“We were following his speeches in Tunisia. His many stances are still rememberable until this day and present in the minds of many people,” Saied said.

“May God have his extended mercy upon him and make him join the prophets, the steadfast affirmers of truth and the martyrs [in heaven] and excellent are those as companions,” Saied added.


Tunisian President Kais Saied highlighted the need of accelerating the implementation of bilateral entitlements with Egypt, as he met on Saturday with Egypt’s Prime Minister Mostafa Madbouli.

Saied called for implementing the entitlements between Egypt and Tunisia, foremost of which is the supreme committee and the political consultation committee to conduct a comprehensive evaluation of the cooperation and partnership frameworks between the two countries.

The committee shall also formulate new approaches that boost the Egyptian-Tunisian relations and achieve the aspiration of the two countries’ peoples in stability and development, Saied said.

Saied highlighted the mutual values and goals as well as the promising opportunities of cooperation between Egypt and Tunisia.

Madbouli, for his part, hailed the Tunisian stances supporting Egypt and affirmed Egyptian readiness to boost brotherly relations and cooperation with Tunisia.