Statement by H.E. President Abdel Fattah El-Sisi during the Joint Press Conference with President of Republic of Tunisia 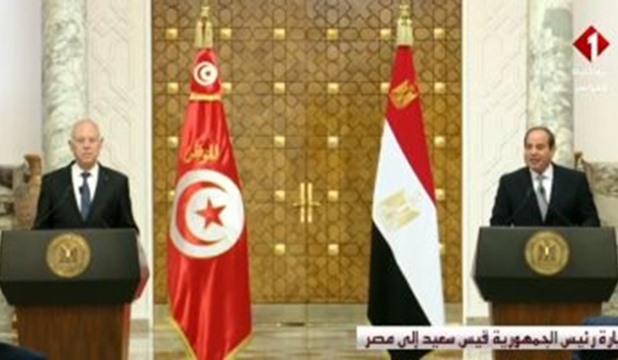 In the name of Allah, the Most Compassionate, the Most Merciful

It’s a great pleasure to welcome my brother, His Excellency, President Kais Saied, in his first official visit to his second country, Egypt, wishing him a pleasant and productive stay. I would like to avail myself of this opportunity to express our profound appreciation for the deep-rooted historical ties between Egypt and Tunisia,

I have held extensive and constructive discussions with my fraternal President, during which we tackled a large number of bilateral and regional issues of mutual interest. These talks reflect our common will towards cementing and broadly promoting the distinguished mutual relations in various fields. This would be achieved through the activation of cooperation frameworks and mechanisms of mutual consultation and coordination at all levels, with respect to both bilateral or regional and international issues of common interest, in a way that contributes to strengthening the mutual rapprochement of the two countries and the two brotherly peoples. This would also be attained, taking into account the common challenges facing Egypt and Tunisia, salient of which are; achieving comprehensive development, countering negative regional interventions, preventing the undermining of the national state, and combating terrorism and extremist ideology.

Our deliberations have reflected the extent of convergence of view between the two countries towards all issues. Furthermore, the efforts of promoting cooperation in economic fields between the two countries have received specific attention in our talks. I have, for my part, emphasized Egypt’s readiness to develop this cooperation, thus achieves the goals of development in both countries on either the trade or investment exchange levels that we hope them to face up to our special political relations.

Furthermore, we have discussed the ways to promote cultural cooperation between the two countries in its different aspects. Thus, this will contribute to enhance rapprochement between the two brotherly peoples, especially that culture has an important role in facing the risks of radicalization faced by the countries of the region. Moreover, we have agreed to announce the year 2021- 2022 a year for Egyptian and Tunisian culture through activating common cultural and artistic activities with their different aspects in each of Egypt and Tunisia. Thus, reflects the common history and the communication between the two peoples.

In addition, the importance of promoting cooperation in countering terrorism with all its forms and manifestations has been stressed. It was also emphasized to ask the international community to adopt a comprehensive approach to address this phenomenon with all its security, economic, social, developmental, intellectual and ideological dimensions. This can be done through facing all terrorist organizations without exceptions, undermining their ability to polarize or recruit new elements, drying up their sources of funding in addition to the importance of facing the extremist ideology that forms a threat to the region and its peoples.

Furthermore, we have reviewed the issues at stake on the Arab arena stressing on the importance of supporting the joint Arab action, preserving the Arab national security and protecting the unity, safety and independence of Arab countries. We have also reviewed promoting the concept of the national state and refusing all trials of foreign intervention in internal affairs of Arab countries.

Moreover, we have stressed the continuity of the Arab efforts for supporting the Palestinian cause, being the central issue of the Arab world. We also emphasized on the necessity to exert efforts to apply the principle of a two-State solution and establish the independent Palestinian State on the 4th of June 1967 lines with East Jerusalem as its capital.

I have also discussed with my brother President Kais Saied the developments of the Libyan crisis, as we stressed the need to activate the Arab role for addressing this crisis. We had also hailed the recent results of the formation of the executive authority in Libya, and confirmed our readiness to provide it with all forms of support in order to perform its role in managing the transitional phase, in addition to holding the elections on the scheduled date at the end of this year, ending the foreign interference and ensuring the exit of all foreign forces, mercenaries, fighters and foreign terrorists from Libya, thus guaranteeing the restoration of its stability and safeguarding its sovereignty, territorial integrity and the capabilities of the brotherly Libyan people.

On the other hand, the issue of Egypt’s water security has been tackled; being a part of the Arab national security, emphasizing the necessity of preserving the water rights of Egypt as a fateful issue. For his part, my brother, President Kais appreciated the Egyptian efforts to reach a fair and comprehensive agreement regarding the rules of filling and operating the Renaissance Dam. We have also discussed the prospects of joint action on the African arena and the means of supporting the African action in light of the important role that Egypt and Tunisia perform in this regard.

I am pleased to meet you today and we evaluate the role played by Tunisia being the Arab Member in the Security Council as well as the efforts exerted to support the Arabian issues. I am looking forward to more close cooperation between both countries for the common interest between us and our Arab nation. I hope Tunisia and its brotherly people goodness, stability and prosperity. I reiterate my welcome to you in your second country, Egypt.