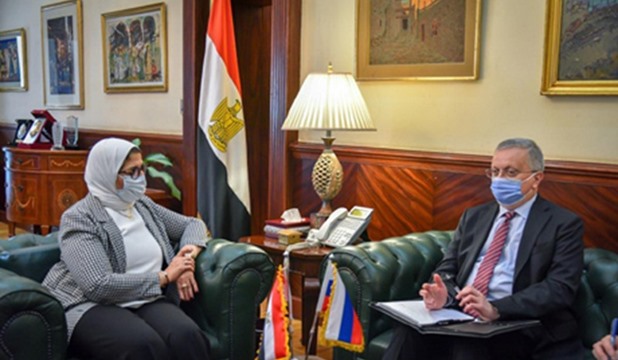 Egypt approved in February the emergency use of Sputnik V, making it the third vaccine to be authorised for use in the country after the Sinopharm and Oxford/AstraZeneca vaccines.

Zayed and Borisenko discussed Egypt’s plans to manufacture the Russian vaccine through national companies, a statement by the Egyptian Ministry of Health read.

This comes with the aim of meeting Egypt's vaccination needs and paving the way for the country to export vaccine doses to African states, the statement added.

The ambassador affirmed his endeavour to accelerate the procedures of dispatching Sputnik V doses to Egypt.

Borisenko voiced Russia’s full support to cooperation with Egypt in facing the pandemic within the framework of boosting Egyptian-Russian relations.

Like the Chinese Sinopharm vaccine, which has already been provided to hundreds of thousands of Egyptians, Sputnik V requires two shots, 21 days apart.

Zayed, in a press conference earlier in April, said the cabinet has approved the manufacturing of the Chinese Sinovac vaccine locally by state-owned vaccine maker Vacsera.

She added that one of the vaccine manufacturer’s factories can produce 20 million doses while the other has a production capacity of 60 million doses annually.

Some of the doses will be exported to Africa, she noted.

Egypt has so far received over 1.5 million doses of coronavirus vaccines of Sinopharm and AstraZeneca and has started its vaccination campaign in January.

In mid-April, the head of the preventive healthcare sector at the health ministry said 320,000 Egyptians have been vaccinated against the coronavirus as part of the national campaign.