The Thirty-ninth anniversary of Sinai liberation.... Icon of the Egyptian championships of dignity and pride 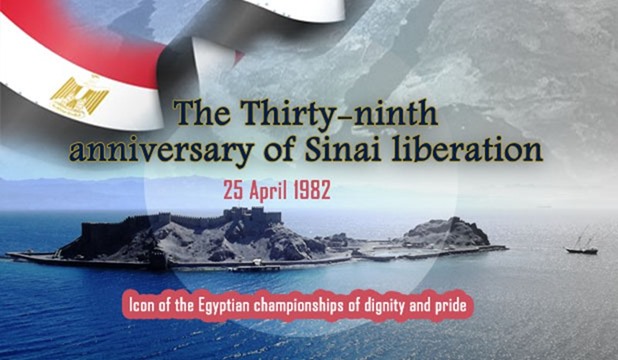 • Egypt celebrates Sinai liberation on April 25, the anniversary of  liberating Sinai, in 1982, from the last Israeli existence on its territory and  raising the Egyptian flag over it. This was achieved after a 15-year occupation and after 1973 war that resulted in Egypt's victory that was followed by an epic of peace and three-year negotiations, starting with the Camp David Accords in 1978 and  Egypt-Israel peace treaty in 1979.  Then, the epic of victory and the restoration of Egyptian military pride were culminated in a legal battle that restored Taba in 1988 and the Egyptian flag was raised on it .

• After the restoration of Sinai and the heroic struggle in countering terrorism, pursuing and defeating terrorist groups in Sinai, eliminating the infrastructure of terrorists and achieving security and safety for the residents  of Sinai, Egypt paid due attention to the development of Sinai. Moreover, Sinai has received the greatest share of President El-Sisi's directives to start the battle of development and construction on its territory. The State has concentrated its efforts, through all its institutions, to implement projects in Sinai's north and south governorates with investments of LE 7 billion. In addition to that, a sum of  LE18 billion  have been allocated to the
two governorates for drinking water and sanitation projects, electricity projects, desalination plants, the construction of new cities such as Al- Salam City, New Bir al-Abd and others. Other projects are also undertaken, including education projects, such as the establishment of new universities and schools, in addition to health projects, including the establishment and development of 9 hospitals, and sports projects and the establishment of 28 sports and cultural constructions. At the agricultural level, 11 projects have been completed in the field of agricultural development, as well as infrastructure projects such as roads, tunnels, and linking Sinai to Suez Canal cities .

• To continue the march of construction and development,  President Abdel Fattah El-Sisi called for action, struggle and construction. Thus, Egypt has gone through a number of  struggles, including the battle of the Coronavirus  pandemic and the great effort Egypt exerts to eliminate this virus and protect the health of Egyptians; the drug security and the localization of pharmaceutical industry and the opening of the first pharmaceutical city in the Middle East; water security and the issue of the Ethiopian Renaissance Dam. In this regard, President El-Sisi asserted that there is no compromise regarding Egypt's water rights as it is an issue of existence. There are also the Delta projects and the cultivation of 1.5 million acres; and the infrastructure projects, including roads, bridges, a new administrative capital and high-speed rail.

• Egypt has proved that it goes along the right path. It has plentiful evidences to prove that. For example, Egypt succeeded in floating the stranded ship (Ever Given  in a record time as the time was estimated by experts to be at least 3 months, but the heroes of the Suez Canal accomplished the difficult task in only 6 days while the world was holding its breath for several days. The Egyptians described this achievement as a second October War and a second crossing of the Canal .

• Egypt has also witnessed an epic of civilization and restoration of the glories of its history with The Pharaohs' Golden Parade of 22 Pharaonic kings and queens that moved in a majestic international scene and a unique extraordinary event transmitted by 400 satellite channels, from the Egyptian Museum in Tahrir Square to the Museum of Civilization in Fustat.
• Egypt also witnesses a huge digital electronic transfer by creating the secured and smart documents complex located on the Cairo-Ain Sokhna road. The complex is the largest in the Middle East and Africa. It has the latest technology for issuing all governmental documents at the highest security level to prevent forgery and secure documents. Thus, every day we witness the emergence of a new project.

• The sacrifices of the Egyptians are enormous. The people of Egypt have every reason to be proud of their achievements on this remarkable anniversary, the 39th anniversary of the battle to restore the holy land of Sinai and raise Egypt's flag high over it.