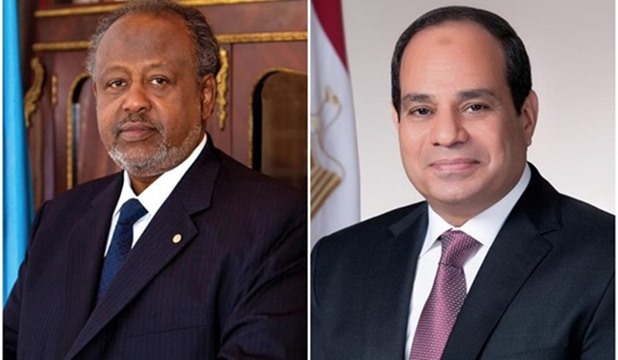 President Abdel Fattah El Sisi arrived in Djibouti on Thursday, where he was received by President Ismail Omar Guelleh, along with a host of senior Djiboutian officials.

President Sisi’s historic visit to Djibouti, the first of its kind, will include an Egyptian-Djiboutian summit to discuss various files related to joint cooperation and means of enhancing bilateral relations especially at the security, military and economic levels; in a way that helps achieve the interests of the two brotherly countries and embodies their mutual strong will to foster bilateral cooperation.

The two leaders will exchange views on regional issues of mutual concern.

Egyptian President Abdel Fattah El Sisi on Thursday 27/5/2021 reaffirmed the inevitability of reaching a fair and balanced agreement on filling and operating the Grand Ethiopian Renaissance Dam (GERD) in the nearest chance to achieve the interests of all parties and promote cooperation and integration among all African countries.
In a joint press conference with President Ismail Omar Guelleh of Djibouti, president Sisi said  in  a statement that Egypt rejects the fait accompli policy followed by any country through taking unilateral measures that do not take into consideration the interests and rights of other countries.

President Sisi said that he had fruitful and constructive talks with the Djiboutian president on means to boost bilateral relations at the political, economic, security and military levels.
He said the two countries agreed to boost economic relations through increasing the trade exchange between them and intensifying cooperation in the field of capacity building and training programs offered by the Egyptian Agency for Partnership for Development. President Sisi thanked president Guelleh for the hospitality he received in Djibouti and the keenness on boosting relations between the two countries in all domains.

Guelleh said he holds Egypt's sincere efforts in support of the economic reform process and development efforts in Djibouti in high esteem, along with Egypt's pivotal role in entrenching stability in the African continent, said the spokesman.
Djibouti President Omar Guelleh highlighted the Egyptian private sector’s contribution to the econmic development process in his country, together with tehcnical support and training programs Egypt offers to Djibouti in the various spheres, Presidential Spokesman Bassem Radi said.

For his part, President Abdel Fattah El Sisi renewed his congratulation to the Djiboutian president for being reelected for a new presidential term, he added.
President Sisi said, in a statement,  he agreed with Djibouti's president on working together to increase Egyptian investments in Djibouti and enabling Egyptian companies to carry out infrastructure projects in the country.
Sisi said he agreed with president Guelleh as well on accelerating measures of building an Egyptian logistics zone in Djibouti to facilitate the exports of Egyptian goods and promote economic cooperation and also to increase cooperation in the fields of transport and health, along with fish farming.
He said they both agreed on intensifying efforts aiming at combating extremist ideologies and training Djiboutian imams by Al Azhar ulemas to contribute to achieving stability in the Arab and African regions.
He said that his talks with president Guelleh coincided with exceptional circumstances in East Africa and the Horn of Africa as the two regions witness disputes and conflicts as well as challenges .
President Sisi said he agreed with president Guelleh on the importance of intensifying cooperation between the two countries on the security of the Red Sea as a strategic artery to the two sides.
President Sisi expressed happiness over visiting Djibouti to boost the partnership between the two countries in line with a joint vision and solid political will, expressing hope for receiving the Djiboutian president in Egypt in the near future to pursue consultations and coordination.