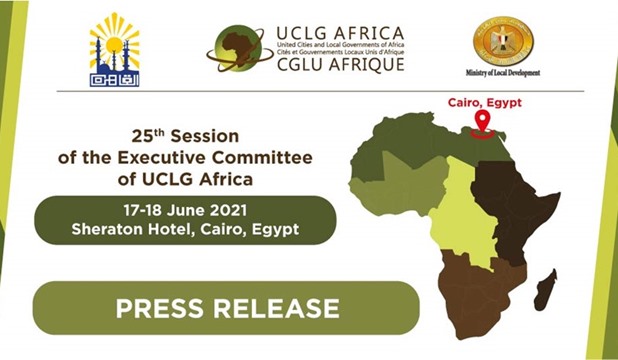 On June 17 and 18, 2021, the 25th ordinary session of the Executive Committee of United Cities and Local Governments of Africa (UCLG Africa) will be held in Cairo (Egypt).

This session will be officially opened on June 17, 2021 by the Minister of Local Development of Egypt, General Mahmoud Shaarawy. On this occasion, the agreement will be signed between the government of Egypt and UCLG Africa for the hosting in Cairo of the headquarters of the UCLG Africa regional office for North Africa (NARO).

The 25th session of the Executive Committee will be devoted mainly to the approval of the accounts for the financial year 2020; to the launch of the preparation process for the elective general assembly of UCLG Africa which will take place on April 29, 2022; to the review of the state of preparations for the 9th edition of the Africities Summit scheduled for Kisumu, Kenya from April 26 to 30, 2022; and to the evaluation of the participation of associations of local authorities in Africa in the programming of the new cooperation cycle of the European Union with partner countries (2021-2027).

As a reminder, the Executive Committee of UCLG Africa is the body responsible for the political leadership of the organization. The Executive Committee includes 16 members, 15 members representing equally each of the 5 regions of the continent (i.e. 3 for each of the 5 regions), to which is added the President of the Network of Locally Elected Women of Africa (REFELA) which is UCLG Africa’s standing commission on gender equality.

Prime Minister Mostafa Madbouly asserted on 17/8/2021 Egypt's full commitment to everything that elevates the African continent within the framework of achieving (Africa Agenda 2063).

Egypt endeavors to put all its experiences in the service of sisterly African countries as development and investment are the basis for facing the challenges of illegal migration, extremism and terrorism, the Prime Minister said here Thursday 17/6/2021 during a meeting with Mohamed Boudra, the President of United Cities and Local Governments (UCLG).

The meeting was attended by Jean Pierre Mbassi, the Secretary-General of the United African Cities and Local Governments Organization, Eugene Wamalwa, the Minister of Local Authorities of Kenya, and Makura Dau Coulibaly, the President of the Elected Local Women Network, and a number of members of the Executive Council of the United African Cities and Local Governments Organization, in the presence of Minister of Local Development Mahmoud Shaarawy, and the Governor of Cairo Khaled Abdel Aal. The meeting was held on the occasion of the signing of an agreement between Egypt and the “UCLGA” organization on the establishment of the headquarters of the Organization's Regional Office for North Africa in Cairo.

Madbouly reviewed Egypt's accomplishments at the urban and development levels, especially with regard to its construction boom and infrastructure upgrades, stressing Egypt's full readiness to put its experiences in this field to serve African cities.

President Abdel Fattah El Sisi, after assuming the presidency in 2014, laid out a clear plan to bring about development for Egypt in all fields and paid special attention to the infrastructure as being the basis of development, he added.

Egypt is currently witnessing the establishment of 20 new cities and the refurbishing of old cities, mainly Cairo, which is witnessing a real boom in development felt by all its residents, in addition to the construction of a road network that exceeded 7,000km of high-quality roads, which have contributed to raising the road quality index in Egypt to 19th place globally, and contributed significantly to saving time and effort and facilitating investment, he added.

Madbouly expressed Egypt's full support for hosting the next session of the African Cities Summit in Kisumu, Kenya, asserting that Egypt is pleased to host the session that follows.

The Prime Minister stressed that "the selection of Cairo to host the 25th Executive Council of the African Cities and Local Governments Organization is a source of pride for us in the week of African events in Egypt," pointing to his participation in the opening of the first forum of heads of investment bodies in Africa, which Egypt hosted in the city of Sharm El-Sheikh a few days ago. Cairo hosted the meetings of the Fifth Conference of the Supreme Constitutional Courts in Africa, which is organized annually by the Egyptian Constitutional Court with the aim of enhancing our capabilities to achieve justice and support the security and stability of our societies, he noted.

Minister of Local Development Mahmoud Shaarawy said the United Cities and Local Governments of Africa (UCLG Africa) is part of the government's growing interest in the African continent since 2014.

The UCLG Africa also comes in implementation of the directives of President Abdel Fattah El Sisi and an exact translation of the Egyptian government program where the Egyptian-African ties figure high.

Shaarawy's remarks came during the 25th round of the inauguration of the executive council of the UCLG on Thursday.

Shaarawy asserted that several achievements were realized over the past seven years, adding that Egypt accomplished an unprecedented leap in the level of construction and urban development as 20 new cities were built, which represents 90% of total cities that were built over thee past 50 years.

Shaarawy said Egypt carries out giant projects in the field of housing, adding that there are one million housing units.

He said that the state is working on eradicating slums and providing alternative safe houses for 23 million citizens.

Egypt witnesses an upgrade in the quality of local, regional and international roads, he said.

Cairo Governor Khaled Abdel Aal said he was honored to take part in signing an agreement on establishing the regional office of the United Cities and Local Governments of Africa (UCLG Africa) organization for North Africa in Cairo.

It is a unique "historic event" which proves that cooperation and joint management can together help overcome difficulties and challenges, and make impressive achievements, Abdel Aal added.

The Cairo governor made the remarks as part of a speech he delivered during the 25th session of the UCLG Africa’s executive council that is organized by the Ministry of Local Development in cooperation with Cairo Governorate.

He expressed thanks to the UCLG Africa Secretary General Jean Pierre Elong Mbassi as well as to the council members for selecting Cairo to host the 25th session of the executive council.