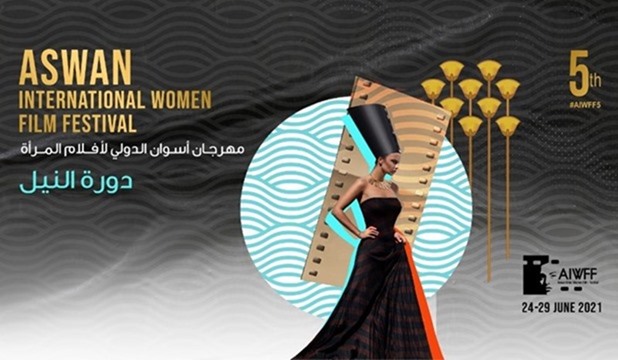 The fifth edition of Aswan International Women Film Festival (AIWFF) opened on Thursday 24/6/2021 in this charming Upper Egyptian city with the participation of 12 feature films and 14 short ones focusing on women’s rights and causes.

“It’s an exceptional edition that is held in difficult conditions the whole world is going through,” said Hassan Abo el-Ela, the festival’s director. “We work on two parallel directions: the cinema in general and the women’s causes in particular.”

Egyptian, Arab and international filmmakers, actors and actresses gathered on the red carpet at the front yard of a hotel in Aswan on the bank of the Nile River, during the gala that was held under the proper anti-coronavirus precautionary measures.

The festival doesn’t only screen films but also holds workshops to develop the filmmaking skills of the youth in Aswan and Upper Egypt in general. A referendum on the best 100 films on women in the Arab cinema will be organized for this year’s edition.

The 5th edition of Aswan International Women Film Festival revealed the names of its Jury members for the Euro-Mediterranean Film Competition sponsored by the European Union in Egypt in collaboration with EUNIC Egypt.

The festival management decided to honor the iconic French actress Macha Méril at its opening ceremony that will take place on June 24-29 in Aswan, Egypt.

Born in Rabat, Morocco to a father from the Russian princely house Gagarin and mother from a noble Ukranian family, her career in cinema has included 125 films between 1959 and 2012.