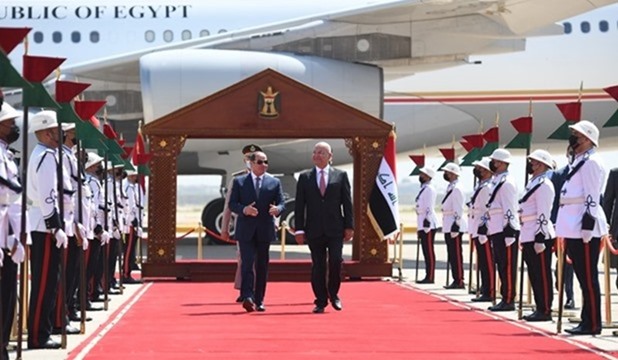 The summit falls within the framework of the fourth round of talks for promoting a trilateral cooperation mechanism which was launched in Cairo in March 2019.

Iraqi President Barham Salih received Sisi upon arrival at Baghdad International Airport, Egyptian Presidential Spokesman Bassam Radi said, noting that this is the first visit by an Egyptian president to Iraq in 30 years.

The visit reflects the depth of the Egyptian-Iraqi historical ties, Radi said, stressing Egypt's keenness on furthering cooperation with Iraq.

Sisi's participation in the summit is meant to build on what was achieved during the past three summits, assessing the progress realized in various domains and following up ongoing projects.

The summit is also meant to promote political consultations among the three countries with regard to the challenges besetting the Arab world and the Middle East region.

Sisi is scheduled to meet with the Iraqi premier on means of bolstering bilateral ties, especially in the economic and trade scores. The two sides will also address a host of regional issues.

Sisi will also convene with the Jordanian monarch for talks on ways to beefing up bilateral ties in addition to holding continued consultations on issues of mutual concern.

President Abdel Fattah El Sisi asserted that Egypt was looking forward to upgrading bilateral cooperation with Iraq within the framework of sustainability of economic integration and strategic cooperation especially in light of the major challenges besetting the region and the negative impact of the coronavirus pandemic.

These remarks were made by the Egyptian president during his meeting with Iraqi President Burham Saleh. The two leaders reviewed means of pushing forward strong bilateral ties between the two countries in the various fields along with enhancing consultations regarding regional issues of common interest.

President Sisi extended thanks to his Iraqi counterpart for the warm hospitability, expressing his appreciation for the close and historic relations binding the two countries at the popular and official levels.

Sisi wished all success for the executive authority in Iraq in managing the state's affairs at the current critical phase in the history of the Iraqi people.

Saleh, for his part, welcomed President Sisi and described him as "dear guest" of Baghdad, asserting the depth of the two countries' ties. He also asserted Baghdad's keenness on promoting cooperation with Egypt to the level of strategic partnership with the objective of achieving the two countries' interests and laying a cornerstone of regional security and stability.

The Iraqi president also highlighted the pivotal role of Egypt at the regional and international levels.

Saleh also voiced hope over benefiting from Egypt's successful expertise in implementing development projects, introducing comprehensive economic reforms in addition to the strenuous efforts exerted by Cairo to combat extremism and terrorism. He also highlighted the need for enhancing coordination between the educational, cultural and religious institutions in both countries.

President Sisi was given a red-carpet reception and the national anthems of the two countries were played.

The Egyptian president reviewed the honor guards as part of his official welcome.

Egyptian President Abdel Fattah El Sisi affirmed Egypt's supportive stance to Iraq's unity and its efforts to restore security and stability along with keenness on enhancing its role in the Arab region, pledging Cairo's full backing to the Iraqi people in all fields at the bilateral level or through a tripartite cooperation involving Iraq, Egypt and Jordan, Presidential Spokesman Bassam Radi said.

The Egyptian president's remarks were made during his meeting on Sunday with Iraqi Parliament Speaker Mohammad al-Halbousi as part of his current visit to Iraq.

During the meeting, Sisi noted that Egypt's backing to Iraq comes within the framework of its policy based on entrenching the principle of uniting ranks with the aim of achieving stability, prosperity and progress for all sisterly Arab countries.

Sisi stressed the depth and mightiness of relations binding Egypt and Iraq at all levels, expressing appreciation of the Egyptian people and government to Iraq in view of its central role in the region and based on its outstanding civilization and history.

Egypt is very keen on continuing work in order to promote ties with Iraq in all fields especially the parliamentary one, Sisi noted.

Meanwhile, the Iraqi speaker welcomed the historic visit by President Sisi to Baghdad, asserting that it could contribute to expanding horizons of cooperation between the two sides at all levels.

Halbousi also asserted that Iraq has cherished its close historic ties with Egypt, praising its role in maintaining the security and stability of Iraq and the whole Arab region.

He also said Iraq is looking forward to promoting relations between the two countries especially in the parliamentary domain, taking into consideration the long expertise and history of the Egyptian parliament.