July 3rd Naval Base message of peace, development for region--Commander 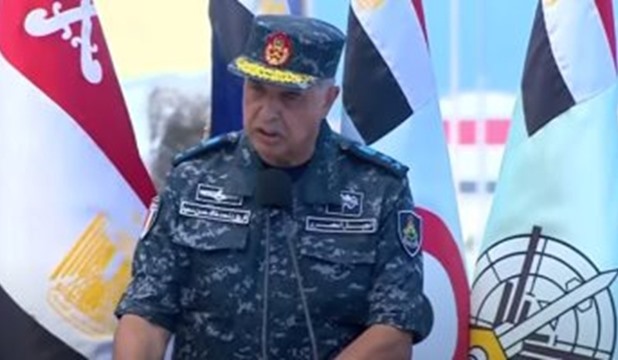 Commander of the Egyptian Naval Forces Vice Admiral Ahmed Khaled on Saturday 03/07/2021 said the July 3rd Naval Base forwards a message of peace and development to the region at large.

The base was opened by President Abdel Fattah El Sisi in Gargoub area, in Egypt's northwest coast.

Addressing the opening ceremony of the base, Khaled said "We celebrate today the addition of a ‘new fortress’ to our existing great ones and a new capability to be added to our growing capabilities as part of a program aimed at fully modernizing maritime forces within the strategic vision of the political leadership of the Egyptian state."

This strategic vision prioritizes the protection of the homeland against terrorism and extremism, he added.

"Without stability and security, no development or progress can be achieved," Khaled said.

Commander of the Egyptian Navy Vice Admiral Ahmed Khaled spoke of the big challenging mission of developing the naval forces, noting the accomplishments already achieved thanks to the continuous follow up and the strong support the Navy has received.

The elements of time, precision, quality and the good use of resources were important in carrying out the ambitious plan for the comprehensive upgrade of the naval forces, Khaled said.

Today the Egyptian flag was raised over 47 new naval units, he boasted, pointing out that this is a great step and a strong addition to the Navy’s capabilities on all strategic directions.

The newly inaugurated base includes two FREMM Bergamini frigates, an Egyptian Gowind-class frigate, a 209 submarine and 15 motorboats of different types, he said.

He highlighted the strategic position of the naval base, which occupies an area of 10 million square meters. Its location on the western coast of the Mediterranean clearly signals the Egyptian state’s commitment to safeguarding the Suez Canal, protecting maritime security, defending freedom of navigation, securing global shipping routes and combating illegal migration and smuggling operations, he went on to say.

The Navy Commander said that the capabilities of July 3rd Naval Base help in conducting multiple and diverse operational, training and logistics missions, in addition to implementing joint drills with friendly and sisterly countries.

Khaled pointed out to the great achievements accomplished, adding that it is a new start towards developing the capabilities of the naval forces and promoting the naval defense industries to boost Egypt’s naval security and blue economy.

Khaled vowed that the development and progress approach will go on and that more efforts will be exerted for supporting the nation’s potentials.