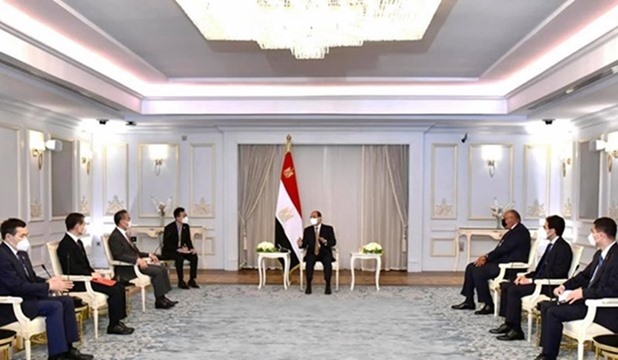 The Spokesman for the Egyptian Presidency stated that President El-Sisi welcomed Mr. Wang Yi in Egypt and asked him to convey his greetings to President of the People's Republic of China Xi Jinping.

His Excellency stressed Egypt's keenness to promote the comprehensive strategic partnership bringing together the two countries.

It was noted that this year marks the 65th anniversary of diplomatic ties between China and Egypt. Those years witnessed extended cooperation and coordination efforts between the two countries in various fields.

President El-Sisi also praised the Chinese experience which he described as a success story that the world seeks to draw lessons from in order to advance the comprehensive development process for the good of the peoples.

For his part, the Chinese Foreign Minister conveyed to the President a verbal message from President Xi Jinping. In the message, the Chinese President affirmed China's keenness to continue developing its strategic relations with Egypt, noting that China respects and appreciates President El-Sisi and Egypt which has a pivotal role in maintaining stability in the Middle East.

He also stressed that China will continue supporting Egypt’s efforts in fostering comprehensive development, combating terrorism and achieving security and stability in the region.

Regarding the bilateral cooperation between the two countries, both parties expressed their keenness to develop it at the international level. In this regard, the Chinese Foreign Minister made it clear that the Shanghai Cooperation Organization (SCO) has agreed to grant the status of dialogue partner to Egypt. SCO makes coordination and cooperation efforts in the fields of combating terrorism and extremism, energy and science.

The Spokesman stated that the meeting discussed prospects for enhancing aspects of bilateral cooperation between the two countries. In this regard, the coordination efforts that were made at the highest levels since the outbreak of the coronavirus pandemic were praised. Egypt, hence, signed a joint manufacturing agreement with “Sinovac”. This is a step that supports the localization of the pharmaceutical and vaccine industry in Egypt.

The President and the Chinese Foreign Minister expressed their aspiration to continue the fruitful cooperation between the two countries at all levels so as to strengthen international efforts in facing the repercussions of the pandemic.

The President also stressed Egypt’s keenness to benefit from the distinguished Chinese expertise that would support development programs and national projects in Egypt. It was added that Egypt’s modern infrastructure is one of its assets that integrates with the Belt and Road Initiative and that the “Suez Economic and Trade Cooperation Zone” has an important role and sets a good example of successful investment cooperation between the two countries.

The latest developments concerning the Renaissance Dam issue were also discussed during the meeting.

President El-Sisi affirmed Egypt's strong position to preserve its water security, represented in its historical rights in the Nile waters, by reaching a legally binding agreement for the filling and operation of the Grand Ethiopian Renaissance Dam (GERD).

This agreement would achieve the interests of all parties in a fair manner.

Mr. Wang Yi made it clear that his country is fully aware of the importance of the Nile River to Egypt, hence China is keen to reach a solution to this issue in a manner that would meet the interests of all parties.