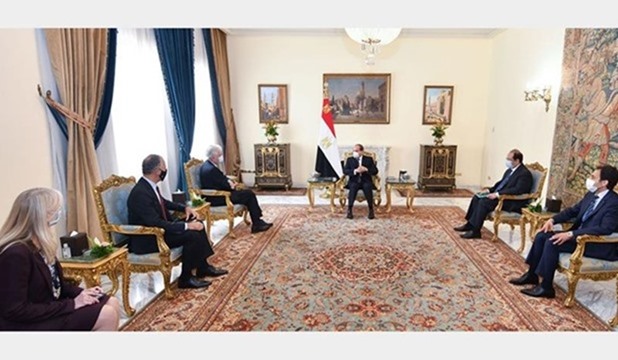 President Abdel-Fattah El-Sisi received today US Director of the Central Intelligence Agency Mr. William Burns, in the presence of Head of General Intelligence Mr. Abbas Kamel, as well as US Ambassador to Cairo Jonathan Cohen.

The official spokesperson for the Presidency of the Republic stated that the President welcomed the American official and asked him to convey his greetings to President Joe Biden, stressing the importance that Egypt attaches to strengthening the solid cooperation between the two countries in various fields, especially at the security and intelligence levels in light of the spread of the threat of terrorism and extremism. .

The Director of the Central Intelligence Agency conveyed to the President the greetings of the American President, expressing his country’s pride of the constructive cooperation and close relations that bind it with Egypt, and stressing the keenness of the United States to continue coordination with Egypt regarding various challenges, especially in light of developments in the Middle East, the Eastern Mediterranean and the African continent, praising in this context the leadership of the President of the efforts to strengthen security and stability regionally, which has consolidated Egypt's role as an axis of balance for regional security as a whole.

The Spokesman added that the meeting witnessed discussions on ways to enhance security and intelligence cooperation between the two countries on various related issues. The meeting also touched on exchanging views on developments related to a number of regional issues of common interest, especially at the level of tensions in the eastern Mediterranean, in addition to the developments in Afghanistan, as well as developments in the Palestinian issue and the Renaissance Dam file, as well as the crisis in Libya .