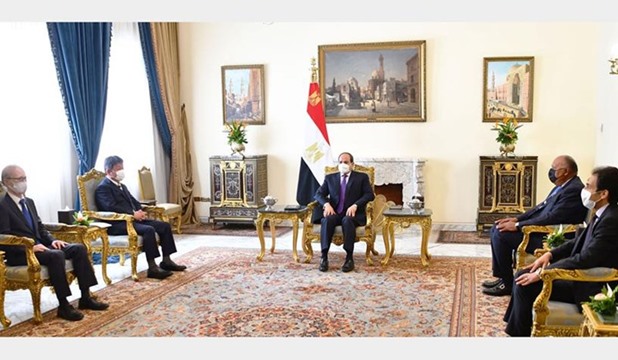 President Abdel Fattah El-Sisi on  Monday 16/8/2021 received Japan's Minister for Foreign Affairs Toshimitsu Motegi in the presence of Minister of Foreign Affairs Sameh Shoukry and the Ambassador Extraordinary and Plenipotentiary of Japan to the Arab Republic of Egypt Masaki Noke.

The Spokesman for the Egyptian Presidency stated that the President welcomed the Japanese official's visit to Cairo, asking him to convey his greetings to the Japanese Prime Minister, Yoshihide Suga.


Furthermore, President El-Sisi expressed Egypt's pride in the close and fruitful relationship it has with the friendly country of Japan, which has a great civilization and ancient values.


The President stressed Egypt's interest and keenness to open up broad prospects for enhancing cooperation between the two countries in furtherance of joint work in many fields, particularly development, economic and investment.


The President noted that the good reputation enjoyed by Japanese companies in Egypt, their technological expertise and advanced industrial quality underpin the expansion of Japan’s activity in Egypt.


For his part, the Japanese Foreign Minister conveyed to the President the greetings of the Japanese Prime Minister. Mr. Motegi stressed that Japan attaches particular importance to its relations with Egypt at the levels of bilateral cooperation and political consultation due to Egypt’s important and pivotal role in its regional environment to consolidate stability and peace in the Middle East.


The Japanese Foreign Minister also affirmed his country's aspiration to strengthen economic relations with Egypt and increase Japanese investments in light of the economic growth and comprehensive development Egypt is witnessing.


Mr. Motegi expressed, in this regard, his appreciation for the support President El-Sisi provides for the Japanese companies operating in Egypt to facilitate their work and clear any obstacles.


He also pointed to the fact that Japan intends to intensify its efforts in implementing bilateral projects with Egypt, especially in the fields of technology, energy, and transportation.


These cooperation efforts would also include the Grand Egyptian Museum, an icon of joint cooperation between the two countries along with the Japanese schools in Egypt.


The Spokesman added that the meeting discussed a number of regional files of common interest. The Japanese official expressed his country's support for the Egyptian efforts in the context of combating terrorism and extremist ideology in the Middle East.


He also praised the effective efforts Egypt makes to resolve the Palestinian question and calm the situation in the Gaza Strip. Moreover, views were exchanged on the latest developments in Afghanistan.


Both sides agreed on the importance of reaching political solutions to the crises in the region. They stressed the need to continue consultation and coordination between the two sides in various international frameworks and forums.


They discussed, in particular, the joint efforts made to prepare for the next session of Tokyo International Conference on African Development (TICAD) in Tunisia next year to consolidate the success of the seventh session of the TICAD in Yokohama, 2019, which Egypt and Japan jointly chaired.