Global press after a tour in VACSERA organized by SIS: Egypt has become African 'blocking wall' against pandemics 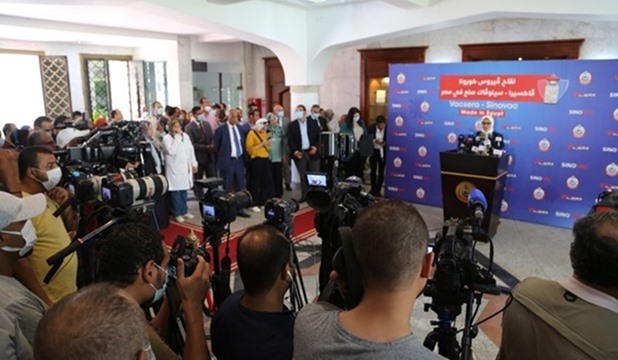 World news agencies and media outlets commended big scientific, technological and human potentials Egypt is now possessing as regards manufacturing and producing vaccines, particularly after the country had established factories to locally manufacture vaccines in the 6th of October city.

The plant will start production in November. Now Egypt has now become a "blocking wall" to protect its people and peoples of the African continent against pandemics, with special focus on Covid-19 pandemic.
The remarks to the effect were made by some reporters following their tour of VACSERA factories on Thursday 2/9/2021.
The reporters took pictures of all phases of producing the vaccines and held collective and separate meetings with the head of VACSERA, officials and experts.
Meanwhile, head of the State Information Service (SIS) Diaa Rashwan said in statements that the SIS organized the tour, which included 68 reporters to learn more about mega projects, which are being carried out nationwide.
The move comes in line with President Abdel Fattah El Sisi's directives to help foreign media outlets to get acquainted with industrial castles on the ground in Egypt, added Rashwan.
The tour also comes in response to several requests by foreign reporters to visit these factories, he said.
The tour also included the factory for vaccine production in Agouza neighborhood in Giza Governorate, he said.
In turn, the reporters commended state-of-the-art technologies seen in the factories, which follow quality production systems worldwide.
At the end of the tour, Health Minister Hala Zayed met with the reporters to discuss the importance of the factories to produce the vaccines in order to provide the needs of Egypt, Africa and the Middle East.