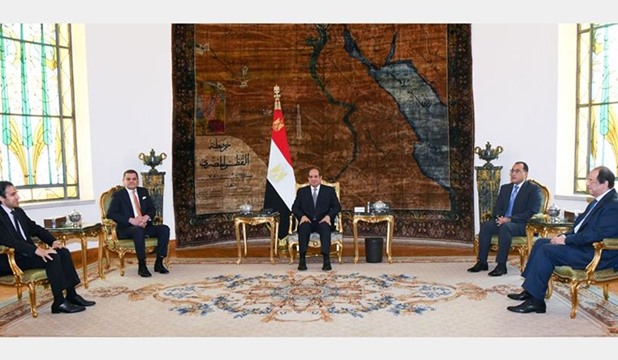 President El-Sisi welcomed Mr. Al-Dabaiba in Egypt where he arrived to participate in the meetings of the Joint Egyptian-Libyan Higher Committee. The President underscored the utmost priority Egypt accords to restoring stability in Libya so as to enable it to reclaim its regional and international role.

The President reiterated Egypt’s firm position in respect of Libya’s sovereignty and territorial integrity, rejecting all forms of foreign intervention in Libya’s internal affairs. President El- Sisi confirmed the importance of strengthening the cohesion of Libya’s national institutions and uniting its national army to protect the resources of the Libyan people and reinforce their free will.
President El-Sisi lauded the endeavors of Mr. Al-Dabaiba’s government, at the domestic level, to improve the living conditions of the Libyan citizen. The President expressed confidence in the ability of the Libyan people to overcome all challenges they are facing in efforts toward the reconstruction of a robust modern state, capable of reinforcing security and stability across all parts of the country.
For his part, Mr. Al-Dabaiba reiterated Libya’s profound appreciation, at the official and popular levels, for Egypt’s key role under the wise leadership of President El-Sisi, to maintain peace and stability in Libya. This comes in light of the historic and brotherly relations that bind the two countries, particularly with regard to supporting Libya’s national institutions and transferring Egyptian expertise in the reconstruction and development of Libya to fulfill the aspirations of the Libyan people for a secure and dignified life. The Head of Libya's Government of National Unity looked forward to further advancing Egyptian-Libyan relations across all areas for the benefit of the two peoples and to support Egyptian investments to implement various projects in Libya.
The Spokesman of the Presidency noted that the meeting focused on developments in Libya. President El-Sisi valued the recent electoral law passed by Libya’s House of Representatives as a cornerstone on the path toward implementing the roadmap agreed-upon by the Libyans, which will culminate in holding parliamentary and presidential elections at end of the year as scheduled. The President voiced Egypt’s readiness to provide all assistance necessary to help the Libyan brothers create a conducive environment to implement the fundamental electoral milestone. This comes in respect for and enforcement of the will of the Libyan people, which emanate from the principles of the Egyptian policy, based on cooperation, construction, development and respect for the values and principles of good neighborliness.