The 9th Tripartite Summit between Egypt, Greece, and Cyprus in Athens 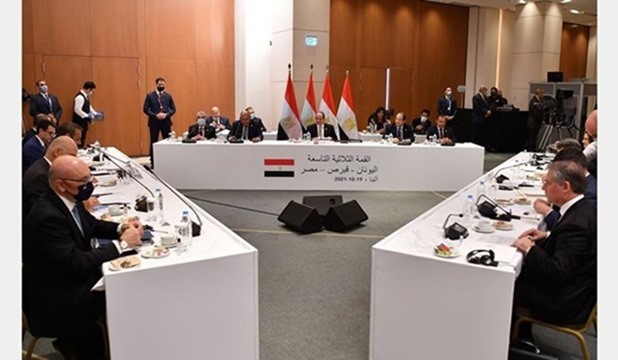 President Abdel Fattah El-Sisi arrived on Tuesday morning 19/10/2021 in the Greek capital, Athens, to participate in the 9th Tripartite Summit between Egypt, Greece, and Cyprus, within the framework of tripartite cooperation mechanism that was launched in 2014.


The Athens Summit aims to build up on what has been realized in the past eight summits, evaluate progress made in various fields of cooperation and follow up on projects being implemented within the cooperation mechanism framework. It, also, seeks to enhance the distinguished relations among the three countries, as well as support and strengthen political consultation among them on ways to address the challenges facing the Middle East and Eastern Mediterranean regions.


The President thanked the Greek Prime Minister for the warm reception and kind hospitality he has received and praised the strong and robust Egyptian-Greek relationship and the bonds of friendship between the two governments and peoples. The President, also, commended the continuous cooperation at the political, military and trade levels in addition to the continuous coordination on regional issues in the Eastern Mediterranean and the Middle East.

President El-Sisi stressed Egypt’s keenness to support and deepen the distinguished relationship between the two countries and developing existing cooperation both at the bilateral level and within the framework of the tripartite cooperation mechanism.

For his part, the Greek PM expressed his pride in the President's visit to Athens, prompted by the special historical ties between Egypt and Greece, praising the strong relations between the two countries, which are developing rapidly in various fields. The President stressed Greece's aspiration to take more tangible steps to strengthen bilateral cooperation and friendship between the two countries as well as the tripartite cooperation mechanism with Cyprus, especially in light of Egypt’s role as a pillar of stability in the Middle East and its efforts in the fight against terrorism and illegal immigration.


The meeting, also, discussed the means of cooperation to overcome the repercussions of the Corona pandemic, as well as strengthening economic, trade and investment ties, and the development of cooperation in the sectors of tourism, agriculture and fish farming, in addition to continuing cooperation and coordination in the field of energy and natural gas, especially with regard to the East Mediterranean Gas Forum.


The meeting, also, addressed a number of regional and
international files of common interest, on top of which are efforts to combat terrorism and illegal immigration, as well as developments in the existing crises in the region, especially with regard to the Libyan crisis. This is in addition to efforts to revive the peace process between the Palestinian and Israeli parties and the Renaissance Dam issue , in light of the presidential statement issued by the UN Security Council in this regard.

President El-Sisi praised the continuous development and rapprochement in bilateral ties between Egypt and Cyprus at various levels. His Excellency stressed Egypt's keenness to continue activating cooperation frameworks, whether at the bilateral level or through the tripartite cooperation mechanism that brings together Egypt, Cyprus and Greece, as well as to maintain Intensive consultation between them regarding various regional issues and developments, especially with regard to ways to confront the challenges in the Eastern Mediterranean region.


For his part, the Cypriot President expressed his country's appreciation for the strength and robustness of the ever developing relations between the two countries at various levels.

President Anastasiades stressed his country’s aspiration to achieve more steps to consolidate the frameworks of bilateral cooperation and friendship existing between the two countries and strengthen the trilateral cooperation mechanism with Greece. The Cypriot President also expressed his country's appreciation for Egypt's support for the Cyprus issue, in accordance with the relevant United Nations references and resolutions, in a way that enhances the security and stability of the region.

He also praised Egypt's role as a pillar of stability in the Middle East and the Eastern Mediterranean and its efforts in the fight against terrorism and legal immigration.

The meeting discussed ways to enhance relations between the two countries in a number of areas of cooperation, especially in light of the outcomes of the Cypriot President’s last visit to Cairo in September 2021. This visit signaled the expansion of bilateral relations to the level of the joint higher committee headed by the two presidents, thus reflecting the distinguished strategic relations between the two countries.


Furthermore, the two sides stressed the importance of following up on the results of the joint higher committee and implementing what was agreed upon through providing a follow-up and evaluation mechanism for ministers and concerned experts and ensuring cooperation in various sectors, especially in the field of energy and electrical interconnection. They also agreed on the importance of removing any obstacles that hinder speeding up implementation steps of the pipeline project that will connect the Cypriot Aphrodite gas field with the Egyptian liquefaction plants so as to encourage export to European markets.

The meeting also tackled the latest regional developments and efforts aiming to reach a political settlement to the crises that hit some countries in the region. The meeting highlighted the developments of the Libyan crisis, the Renaissance Dam file, and Cyprus issue and the situation in the Eastern Mediterranean.

The Summit of the Tripartite Cooperation Mechanism was held in the Greek capital, Athens, between President Abdel Fattah El-Sisi, President of the Republic of Cyprus, Mr. Nicos Anastasiades and Prime Minister of the Hellenic Republic, Mr. Kyriakos Mitsotakis


The summit discussed aspects of cooperation among the three countries, within the framework of the Tripartite Cooperation Mechanism. It emphasized their success to hold periodic consultations and close coordination on regional and international dossiers that affect all the peoples of the region. This reflected a mutual commitment to translating their political agreement into an array of projects on the ground, in the various economic, cultural, security and military sectors. This is in addition to the recent joint cooperation to address challenges and emergency crises, such as forest fires, and countering the health and economic repercussions of the Coronavirus pandemic.


President El-Sisi commended the progress achieved within the framework of the Tripartite Cooperation Mechanism with Greece and Cyprus, stressing the importance of promoting the mechanism toward broader horizons, within the framework of openness and mutual interest to strengthen the pillars of security and stability in the region and the world at large. This is applied in a manner that reflects the interest to leverage the capabilities and resources that qualify the three countries to meet the aspirations of their peoples for more prosperity.

The three leaders focused on existing as well as proposed projects for cooperation, within the framework of the Tripartite Cooperation Mechanism, in the sectors of energy, gas, electricity, tourism, transport, agriculture, among others. They confirmed the presence of promising prospects to foster closer cooperation among the three countries in an array of vital sectors, including the environment and combating the phenomenon of climate change.

The summit, also, touched on efforts to combat illegal migration, terrorism and extremist ideology. In this respect, the three leaders underscored the need to continue efforts toward realizing more cooperation and coordination among them.


Moreover, they discussed a number of regional and international issues of common interest, foremost of which is the file of stability in the eastern Mediterranean region , which would be achieved through the respect of the unity and sovereignty of the region’s states, non- interference in their internal affairs and considerations for the requirements of maritime security of each country, which is integral to regional security.


The three leaders, also, stressed the importance of periodic and regular exchange of opinion and close coordination of positions on a number of issues related to the stability of the region, especially the Palestinian issue, the Libyan dossier, the situation in Syria, and ways to support brotherly Lebanon.

The developments related to the Renaissance Dam were also reviewed, where the President stressed the utmost priority Egypt gives to the issue of water security and Egypt’s rights in the Nile water, which is an existential issue that requires exerting all efforts possible to reach a legally- binding agreement on the rules of filling and operating of the Renaissance Dam, particularly after the recent Presidential Statement issued by the UN Security Council in this regard.

President Abdel Fattah El-Sisi returns on Tuesday evening 19/10/2021 to Egypt after participating in the Athens Trilateral Summit between Egypt, Greece, and Cyprus.