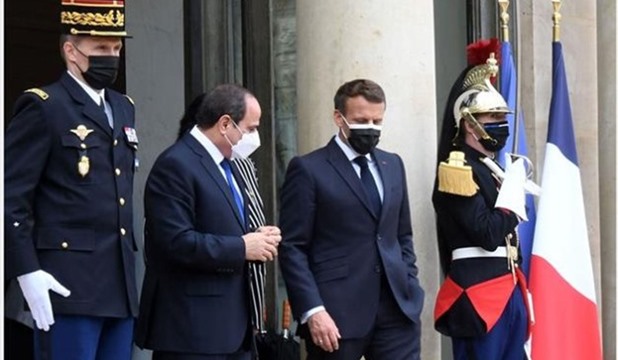 President Sisi’s participation in the gathering comes upon an invitation from French President Emmanuel Macron, in light of the strong ties binding Egypt and France, along with Egypt’s pivotal role in support of a political solution in the oil-crescent country.

The Egyptian president's itinerary includes holding summit talks with President Macron to discuss Egyptian-French ties, especially in light of a momentous leap in bilateral relations over the past years in a way that helped serve their mutual interests.

Talks are also meant to continue joint consultations and coordination vis-à-vis an array of regional and international issues of joint concern.

President Sisi is also scheduled to hold a series of meetings with high-profile French officials to promote cooperation in the economic, military, investment and trade spheres. Besides, the president will meet a number of heads of state and government coming to Paris for Friday’s conference on Libya to probe boosting cooperation and exchange views on regional and international affairs.

Egyptian President Abdel Fattah El Sisi has expressed appreciation for strategic relations between Egypt and France in the different domains.

Parly said that her country is keen on boosting partnership with Egypt especially regarding military cooperation within the framework of fighting terrorism, said the spokesman.

The meeting also took up the recent developments in Libya with the two sides expressing the importance of holding the Libyan elections on December 24, added the spokesman.

The French minister expressed his country's keenness on boosting joint strategic cooperation with Egypt, added the spokesman. Also, France is encouraging French companies to invest in Egypt within the framework of pushing up the development process in Egypt, the minister was quoted by the spokesman as saying.

The minister lauded recent measures adopted by Egypt for attracting more foreign direct investments in the Suez Canal Economic Zone, said the spokesman.The president, added the spokesman, expressed his appreciation for efforts by the French Ministry of Economy and Finance in the field of boosting joint economic cooperation especially in light of the current investment opportunities in Egypt.

President Sisi expressed hope that joint cooperation would cover other fields and sectors such as upgrading the Egyptian countryside and national transport projects along with other projects in the domains of education, health and energy, added the spokesman.

The agenda of Paris conference on Libya

An international conference on Libya will kick off in Paris on Friday with the participation of Egyptian President Abdel Fattah El Sisi.

The conference will be also attended by French President Emmanuel Macron, German Chancellor Angela Merkel, heads of government of more than 20 countries, and presidents of a number of regional and international organizations.

The conference is being organized with the United Nations, Germany and Italy, and comes ahead of elections planned in Libya for December 24.

During the conference, El-Sisi will highlight the need for a concerted effort by the international community to support Libya during the “historical turning point it is currently going through.

This includes holding the long-awaited Libyan elections as scheduled and the exit of all mercenaries and foreign troops and fighters from Libyan territories.

The French Foreign Ministry has announced that the conference aims to provide a driving force for the Libyan elections, discuss ways of expelling all foreign troops and end the the foreign interventions in Libya.
MENA