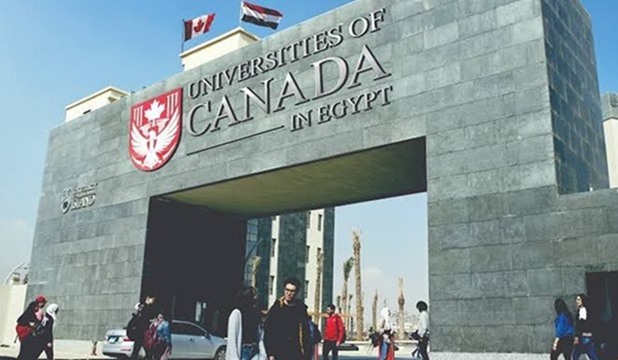 The 48th Annual International Conference for the Association of Egyptian-American Scholars (AEAS) is inaugurated on 27/12/2021, under the theme “The Role of Egyptian Scientists and Expatriates Towards 2030”.

The 3-day conference is held at the Universities of Canada Egypt, which is the first International Branch Campus in the New Administrative Capital and currently hosting top Canadian Universities with futuristic programs.

The conference was attended by Dr. Mahmoud Sakr, President of the Academy of Scientific Research and Technology (ASRT), Dr. Magdy El-Qadi, President of the Universities of Canada in Egypt, and a group of Egyptian scholars in North America and Canada.

Dr. Mahmoud Sakr said, in his speech during the conference, that the environment in Egypt has become ready to receive Egyptian scientists abroad, especially after the increase in the number of universities opened in Egypt. He added that theses universities have succeeded in developing their performance, in addition to the launch of the "Development Bridges" program that aims at linking between the Egyptian scientists at home and abroad.

Furthermore, he pointed out that the state provides the necessary funding for good scientific research, emphasizing that the recent period witnessed the support of about 60 projects of Egyptian scientists abroad and at home.

Dr. Sakr, also, thanked the Universities of Canada in Egypt (UofCanada) for holding the 48th Annual International Conference for the Association of Egyptian-American Scholars at the Knowledge Hub Universities in the New Administrative Capital.

For his part, Ambassador Ahmed Abu Zeid, the Egyptian Ambassador to Canada - during his speech via video conference - expressed his pleasure for organizing the conference for Egyptian scientists in North America and Canada, pointing out that the conference aims to provide all aspects of collaboration in order to achieve Egypt’s sustainable development strategy “Egypt Vision 2030”.

He added that many memoranda of understanding were signed between educational institutions in Egypt and their counterparts in Canada, stressing that the Egyptian state is keen to deepen relations with Canada in various fields.

Dr. Mohamed Atallah, the conference coordinator and Vice President of New York University, said that the conference aims to achieve Egypt’s sustainable development strategy “Egypt Vision 2030”, which reflects the main features of the new republic within the next 15 years. He added that the conference, also, aims to create a forum that facilitates dialogue and promotes partnerships with Egyptian counterparts to implement beneficial scholarly endeavours, in line with the strategy of the Ministry of Higher Education and Scientific Research, which aims at creating a supportive environment for excellence and innovation in scientific research, providing the opportunity for Egyptian scientists to keep pace with their counterparts abroad through international branches of foreign universities in Egypt, and attracting Egyptian cadres.

Dr. Mohamed Hegab, President of the Association of Egyptian-American Scholars (AEAS) said that the idea of creating this Association started by a discussion between Dr. Mohamed El-Wakil of Wisconsin and Dr. Ahmed Shouman of New Mexico in 1968. They both pursued the formalization of the group supported in Cairo by the Egyptian government and the Society of Friends of Egyptian Scholars Abroad.

He added that in 1971, fifteen Charter members were declared, and by 1972 the registration list reached 62 members. In 1973, the Association of Egyptian-American Scholars in the United States and Canada was formally established, and by 1974 it was officially incorporated in the State of Wisconsin, with Dr Mohamed El-Wakil as its President. Through the years close to 600 scholars have joined the Association, very many are still active and supportive.

Since 1974, the Association of Egyptian-American Scholars has contributed abundantly to the scientific and cultural development of Egypt on one hand, and to the academic collaboration of its members in North America.

Hegab pointed out that since its birth, the AEAS has maintained strong ties with Friends of Egyptian Scholars Abroad (FOESA) in Cairo, which helped reunite them occasionally with the local scholars.

For her part, Dr. Hadia Hamdy, Vice-President of the Universities of Canada in Egypt for Academic Development and Strategic Initiatives, emphasized that the conference is scheduled to discuss a number of research papers covering many fields such as sustainability, energy conservation, innovation and entrepreneurship, economic development, public health, medical sciences during a pandemic, and human capital development.

Afterwards, the conference witnessed the honoring of by Dr. Mahmoud Sakr, President of the Academy of Scientific Research and Technology (ASRT) as well as Dr. Magdy El-Qadi, President of the Universities of Canada in Egypt.

A number of scholars participated in the conference, including Dr. Mohamed Atallah, the conference coordinator and Vice-President of New York University, Dr. Adel S. Elmaghraby,  Director of Industrial Research and Innovation, JB School of Engineering, Winnia Professor and former Department Chair of the Computer Engineering and Computer Science Department at the University of Louisville, Dr. Ahmed Ali Sayed, Associate Professor of Electrical Engineering (EE) at the City College of the City University of New York the Director of the CUNY Smart Grid Interdependencies Laboratory, Dr.Mohamed Hegab, President of the Association of Egyptian American Scholars (AEAS), Dr. Mona Ibrahim, Professor of Psychology at Concordia College in Moorhead, Minnesota, USA, Dr. Naser El-Sheimy, Professor and former Head of the Department of Geomatics Engineering at the University of Calgary, Canada.