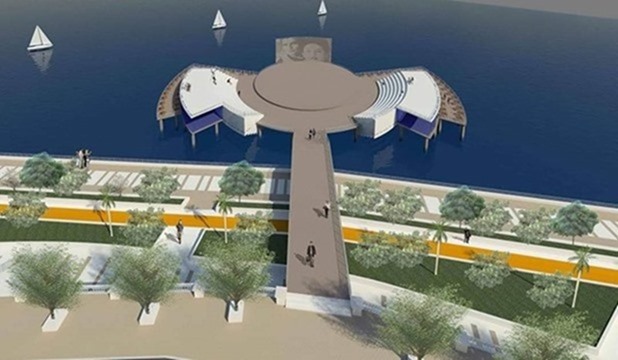 The state seeks to increase the open spaces for hiking by taking advantage of the elements of natural tourism owned by Egypt and on March 18, 2022 the project "Walk of the People of Egypt" was inaugurated

The project targets a wide segment of the population of Greater Cairo, offering them a new vision of the Nile Corniche in a way that we have never seen before.

What is the Ahl Masr Walk Project?

It is a parallel walkway or path along the Nile, equipped with multiple services and facilities with a night lighting system, and also extends to many areas; to be near the most vibrant and dynamic areas of Greater Cairo.

Where is the Ahl Masr Walk project located?

The Ahl Masr Walk project is located on the path of the Nile River in the Greater Cairo Governorate, and the project is easily accessible through these bridges:

What is the importance of the Ahl Masr Walk project?

The project will change the overall view of all areas overlooking the Nile to keep pace with Egypt's Vision 2030.

There are dedicated bicycle spaces to encourage exercise, reduce vehicle use, and reduce car congestion at peak times.

The project aims to increase river attractions and achieve gains for the state by stimulating water tourism by taking advantage of Egypt's location overlooking the Nile.

The Ahl Misr project preserves agricultural areas and installations from erosion in the event of collapse of the river sides.

What is the cost of the project and who is in charge of it?

The project was implemented by Arab Contractors and IDEX International Engineering and Construction, under the supervision of the Armed Forces Engineering Authority, Cairo Governorate, and the Ministries of Housing, Water Resources and Irrigation.

When was the project started and what works were completed?

The project was completed in September 2019, and the implementation of the first and second phases, which included:

The first phase is the starting point of the project and included green spaces in addition to the basic facilities of the project, such as:

The promenade parallel to the Nile.

19 buildings were divided into 62 shops, 5 cafeterias and 5 restaurants.

3 terraces with a capacity of more than 1,000 people

Theatre with a capacity of 772 people

Implementation of a graded personnel walkway

Implementation of 19 buildings divided into a floating restaurant, 3 cafeterias and 63 shops

Two theatres with a capacity of about 1,700 people

Recently, work is underway to finalize the phase, and the government is now in the process of implementing a fourth phase of the project in Zamalek.

What does the Ahl Masr Walk project include?

The project includes all the facilities and services that make it one of the most important national projects, it will not be limited only to the residents of Greater Cairo, but will extend to other governorates through which the Nile River passes. The project plan included the most important pillars that are the foundations of any major tourism project, including:

Terraces for hundreds of people

Trails and boarding places for people of determination

Bicycles to preserve the environment

What is the length of the walkway and where does it extend?

The length of the promenade in the first and second phases will be about 5.2 km, and the length of the third phase is supposed to be 3 km. As for the extension of the project, when we look at the map, we see it stretching from Shubra al-Khaimah in the north to Helwan in the south.

- What services and facilities are to be built next to the promenade?

The project plan has been developed with great precision to make the project of the Walk of the People of Egypt conform to international specifications.

The project includes many services and facilities that will increase the importance of the promenade touristically and economically, as follows:

Dedicated spaces to facilitate the movement of people of determination

- What are the neighborhoods near The Walk?

The government wanted to make the walk of the people of Egypt uncropped andnot on a specific area, so the project was extended to cover the entire course of the Nile River in Greater Cairo; and the most important areas through which the project passes:

Wall of the Eye Stream

What difficulties did the project face before starting implementation?

The difficulties faced by the project were how to remove encroachments and pollution on the sides of the Nile, but these difficulties were eliminated with the help of utility companies and the Ministry of Interior to implement the phases of the project on time.