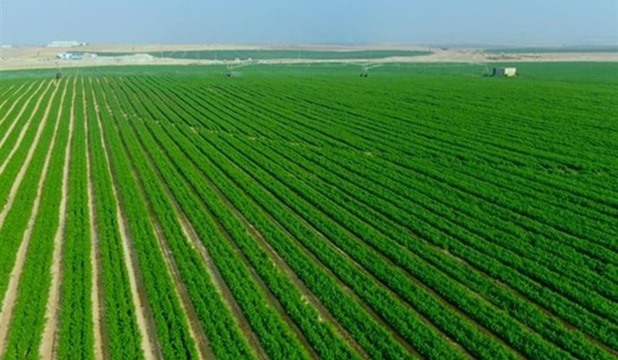 The New Delta project is one of the mega projects in the agricultural field, and it is being built on an area of more than one million acres in the northwest coast.

The “Mostaqba Misr” (Egypt’s Future) project is among the area of the project. The project will add 15% new farmland to Egypt to be used to achieve food security. The project extends from the north of the oases to the south of Wadi al-Natrun, east and west of the Qattara Depression.


The project includes about 688,000 feddans (the study area on the previous map) south of the Dabaa axis, and west of the old delta, in addition to the “Mostaqba Misr” project, which is built on an area of 500,000 feddans.


In the same context, the project includes about 250 thousand feddans related to the national service projects. The reclamation of one feddan costs about 200 thousand pounds.


- The project is located along the new "Rawd El-Farag - El-Dabaa" axis road, which was established within the National Roads Project and is placed about 30 minutes away from the Sixth of October City.


Cultivation of an area of 200,000 feddans has been completed by exploiting the available groundwater in the area, and it is expected to reach 350 thousand feddans by the beginning of 2022, using 1,600 developed central irrigation machines.


The area will be cultivated twice a year (in the summer and winter seasons), producing the finest quality of agricultural crops with a total investment of 5 billion pounds.


The project will be located in the south of the Dabaa axis, west of the “Mostaqbal Misr “project, near the old delta and the network of roads and ports, and linking the administrative borders of the governorates of Matrouh, Beheira and Giza.


About 688 thousand feddans was conducted to the west of the “Mostaqbal Misr” project.


After the study, it became clear that more than 90% of the area is suitable for cultivation of strategic crops, amounting to 500,000 acres, on top of which are wheat, yellow corn, legumes, vegetable crops and various types of fruits.


A giant plant, with a capacity of 6 million m3 per a day, will be established to treat agricultural wastewater for further exploitation.