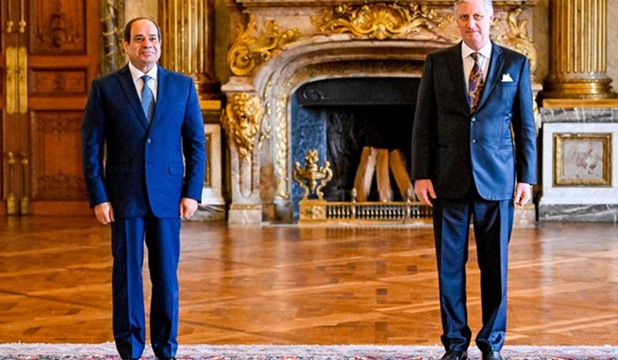 Egyptian President Abdel Fattah El Sisi attended Thursday night a reception and an official dinner held at the Royal Museums of Fine Arts of Belgium, in honor of the heads of state and government participating in the 6th African Union-EU Summit, Presidential Spokesman Bassam Radi said.


Egyptian President Abdel Fattah El Sisi on Thursday chaired a roundtable on climate change as part of his current participation in the 6th AU-EU Summit.

During the session, President Sisi asserted that Egypt's hosting of the COP27 United Nations Climate Change Conference in 2022 comes in view of Cairo's recognition of the dangerous challenges posed by the phenomenon of climate change.

He pointed out that Egypt will seek that the summit comes up with balanced and applicable results to increase ambition about climate action with all its components, whether on the level of reduction of emissions or adaptation with the aim of building on the positive outcome of the previous climate conference held in Glasgow and to turn the pledges taken regarding the climate into an actual fact.

In this context, it is important to support the African continent in facing the climate change crisis including the provision of climate soft loans which is a cornerstone in all such efforts, Sisi explained.

He also reiterated the importance of supporting the just transformation of energy in Africa as part of efforts exerted to reduce carbon emissions and support the green transformation, noting in this regard to the importance of the African initiative on renewable energy which he launched on behalf of the African continent in 2015 as an influential framework for garnering up investments to the renewable energy sector, in addition to the need to raise necessary funds to implement a large number of power linkage projects that have been agreed upon among the African states, within the context of the program for development of the continent's infrastructure.

Presidential Spokesman Ambassador Bassam Radi said the roundtable witnessed an open dialogue on efforts exerted to enhance partnership between Europe and Africa within the framework of international climate action. The conferees agreed on the importance of intensifying work in the coming phase to crystallize a common vision to face the climate change challenges till holding Sharm El Sheikh Climate Summit by the end of this year.

This came during his meeting on Friday with Head of the Libyan Presidential Council Mohamed al-Menfi in the Belgian capital, Brussels, Presidential Spokesman Bassam Radi said in statements.

During the meeting, President Sisi also asserted Egypt's keenness on enhancing coordination with the Libyan side during the current period to activate the free will of the Libyan people, the spokesman added.

For his part, the head of the Libyan Presidential Council expressed his deep appreciation of Egypt's unstinting support for his country in light of the brotherly and deeply-rooted ties between the two countries.

He also lauded genuine efforts exerted by Egypt, under the leadership of President Sisi, to back Libya in order to restore its national institutions and the unification of the Libyan National Army.

He also underlined the vital role played by Egypt in supporting the current political path in Libya at the international level.

The meeting also focused on the latest development in Libya and efforts to restore security and stability there.

In this regard, President Sisi stressed Egypt's firm stand towards achieving the higher interest of the Libyan State in the first place, which stems from the principles of preserving Libya's territorial integrity, restoring security and stability, enjoying a unified national army, ending foreign interference, and the exit of all mercenaries and foreign fighters from Libya.

President Abdel Fattah El Sisi had talks in the Belgian capital on Friday with his Tunisian counterpart Kais Saied on promoting bilateral ties.

In statements, the presidential spokesman said that the talks focused on Egypt's keenness on exerting more efforts to enhance cooperation between the two countries at all levels.

They also discussed strengthening effective communication channels between the two sides at the economic level, along with increasing the volume of trade exchange and investments, the spokesman added.

They also discussed promoting consultations between the two countries on various regional issues of mutual interest, he said.

Sisi Meets Iraqi President on the Sidelines of the Arab Summit 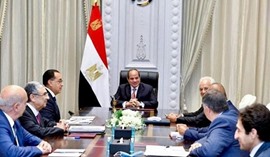