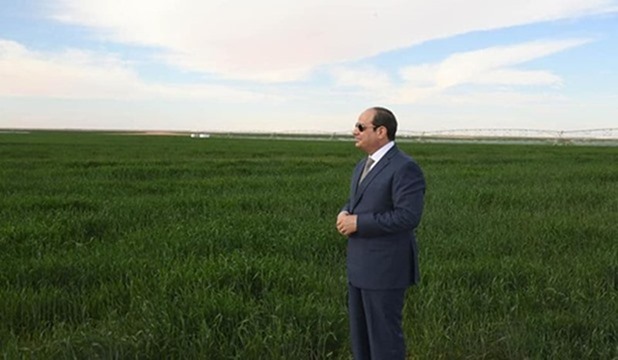 President Abdel Fattah El Sisi opened Toshka Al-Khair project in southern Aswan, which represents one of the most importance projects in the field of agriculture and land reclamation.

President Sisi gave directives to pay attention to the project within the framework of the presidential program to cultivate 4 million acres.

- Overcoming the food gap through increasing the agricultural area by nearly 500 thousand feddans, then reaching one million feddans in the future.

- Maximizing the return on available resources and increasing the Egyptian agricultural exports, the matter which helps narrowing the trade balance deficit.

- Encouraging the reconstruction and development of these areas thus alleviating the human pressure on the Nile Valley and Delta.

- The project helps achieving self-sufficiency of wheat, so that we only need to import less than a quarter of our wheat needs.

- The general plan of the project's first phase includes 12 agricultural areas with an area of 325,000 feddans.

- A number of 11 national Egyptian companies participate in the project under the supervision of the Center of Studies and Designs for Water Projects, with a workforce of 5,000 engineers, technicians and workers.

- In order to provide all services to the Toshka Project and remove all obstacles it faces; Canals with a total length of 19.8 km were excavated and “52” pump stations were established, including “219” ones to pump water for the pivotal irrigation devices. Also, irrigation networks with a total length of 420 km have been extended with sizes ranging from 180mm to 1200mm.

- 415 km of main road networks and paths have been completed, in addition to completing implementation of all electric works to feed the pump stations and central irrigation devices.

- 2 canals were dug with a total length of 38 km, with a total drilling quantity estimated at 9 million cubic meters.

- 2 lifting stations were established with a total of (10) pumps, with a productive capacity of 3 million m3/day.

Toshka Palm Trees Farm aims at placing Egypt in the second position on the world map for the production and export of dates through cultivating the high-quality and economically date.

- Cultivation of dates in Toshka will raise production from 1.8 to 2 million tons annually, with an increase of 250.000 tons, while taking the number of palm trees from 15 up to 18 million palm trees.

- Cultivation of high-quality date on an area of 25.000 feddans helps enhancing the economic and marketing value of the project.