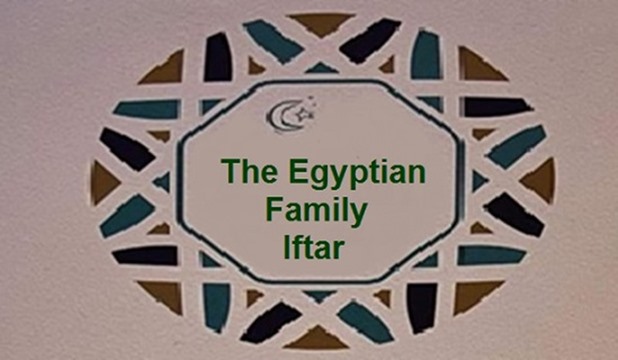 President Abdel-Fattah El-Sisi participated on Tuesday 26-4-2022 in the Egyptian Family Iftar, in the presence of the Prime Minister, a large number of ministers, His Eminence Dr. Ahmed El-Tayeb, Sheikh of Al-Azhar Al-Sharif, His Holiness Pope Tawadros II, Pope of Alexandria and Patriarch of the See of St. Mark, with the participation of Sinai chieftains and a large number of public figures, heads of political parties as well as members of the House of Representatives and Senate, in addition to representatives from farmers, artists, intellectuals, academics, businessmen, youth and women.

This banquet is held every year since 2017 with the participation of all segments of society.

During the Egyptian Family Iftar banquet, President Abdel Fattah El Sisi watched a documentary on the humane attitudes, honesty and noble values of some people who appeared in "Hayah Karima" TV show.

The documentary shed light on two episodes of the show, broadcast during the holy month of Ramadan.

In the first episode, the show team met a delivery girl named Sara who returned to a customer a sum of money given to her by mistake.

The second episode was about a young driver named Mina who unhesitatingly refused to take a fare from a penniless passenger.

The two episodes, which accumulated millions of views, were highly appreciated by a great number of viewers.


The President delivered a speech at the Egyptian Family Iftar banquet, in which he vowed to be as honest as always with Egyptians and loyal to the homeland.

At the beginning of his speech, President Sis,i greeted Egyptian Muslims and Christians on Easter and the approach of Eid ul-Fitr.

Then, President Abdel Fattah El Sisi said the State faced great challenges over the past years, however it achieved greater successes.

The president explained that the incidents shown on the TV series El Ekhteyar 3 (The Choice 3), which depicts the events Egypt witnessed in the years following the January 25 Revolution, were real.

Sisi, also, said that Egypt ran out of foreign currency reserves in a period fraught with crises that no president would have been able to overcome.

He highlighted that Egyptian citizens have borne the consequences of implementing an ambitious and necessary program for economic reform, which was implemented in tandem with rebuilding and developing the State's infrastructure, the president noted.

He added saying that the support provided by Arab countries in 2013 and afterwards has contributed to preserving the Egyptian State.

In this regard, he said Egypt’s development steps have been firm and steady and its will to realize progress unwavering.

During the banquet, Sisi greeted Sinai chieftains and thanked them for their cooperation with the State, saying: "We target achieving real development in Sinai."

He, also, greeted Egyptian women for their great role in serving the nation.

The president went on to say that Egypt suffered losses worth USD 37 billion in less than 24 months because of the turmoil that followed 2011, noting that the army spent EGP one billion monthly for seven years to eradicate terrorism.

With regard to the losses that the State incurred following the 2011 incidents, the president said Egypt's credit rating retreated six times from 2011 to 2013.

The president noted that this period witnessed a hike in unemployment rates, in addition to a sharp decline in the country's foreign reserves.

President Sisi, furthermore, hailed the great financial support by Arab states between 2013 and 2014, saying that they provided Egypt with tens of billions of dollars to support the country's economy.

He asserted that the State managed to overcome the coronavirus crisis and would be able to deal with the Russian-Ukrainian crisis.

First: The President directed the government to hold an international press conference to lure investments in the fields of infrastructure, energy, tourism and real estate development.

Second: The president announced the launching of an initiative to strengthen local industries and reduce imports, while granting a five-year tax exemption.

Fourth: The President issued directives to provide full support for wheat farmers to achieve self-sufficiency of this strategic commodity.

Fifth: The president gave instructions to reinstate a presidential prisoner pardon committee that was formed within the National Youth Conference.

Sixth: The President directed the government to continue organizing exhibitions and fairs that offer basic commodities at affordable prices.

Seventh: The President ordered the National Youth Conference's organizers to hold an expanded dialogue on issues of interest to society and submit the recommendations to him.

Eighth: The president asserted that he was keen to activate the political reform programs, noting that the State intends to initiate a dialogue comprising all political powers.

Ninth: The President ordered the government to draw up an urgent action plan to reduce debts and cut the budget deficit, in addition to developing the EGX.

Tenth: The President directed the government to launch a 4-year program that allows the private sector to hold stakes in state-owned assets, with a target of USD 10 billion annually.

Eleventh: The president allocating a sum of EGP 45 million to complete the payment of debts of 700 indebted persons in prisons to release them as a first batch, aiming to integrate them into public life and empower them economically.