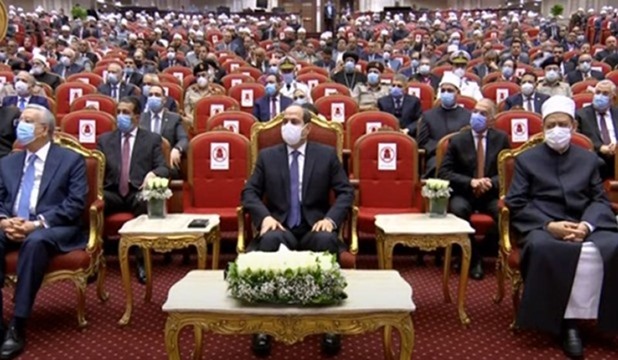 President Abdel Fattah El Sisi arrived on Wednesday 27-4-2022 at the Al Manara International Conference Center in New Cairo to attend a ceremony marking the Laylat-ul-Qadr, the night when the Prophet Muhammad received the first revelation from Allah.

The ceremony was, also, attended by Speaker of the House of Representatives Hanafy Gebaly, Speaker of the Senate Abdel Wahab Abdel Razeq and Awqaf Minister Mohamed Mokhtar Gomaa.

As President Sisi entered the celebration hall, he was keen to shake hands with Dr. Ahmed Omar Hashem, a member of the Council of Senior Scholars in Al-Azhar, where the latter presented a salute of appreciation and reverence to President Sisi for the sacrifices he made to Egypt to protect it and protect its people, saying: " A salute of appreciation to our honorable president and the great leader of our march, President Abdel Fattah Al-Sisi on the day we are happy to celebrate the Night of Power, the night of the revelation of the Noble Qur’an, the heavenly constitution that the Lord of Glory preserved and protected.

The ceremony started with a recitation of verses of the Holy Quran by Sheikh Hani el Husseini.

Addressing the ceremony, Awqaf Minister Mohamed Mokhtar Gomaa said that Egypt serves the Holy Quran and makes honoring its memorizers a regular course, which it does not deviate from.

The minister asserted that people should work their minds to correctly understand the Quranic text.

He said his Ministry is making constant strides in training and rehabilitating imams and preachers.

As per President Abdel Fattah El Sisi’s directives, the minister said that Al Azhar Al Sharif, in cooperation with the International Endowments Academy, the National Training Academy, and more than 20 universities, managed to train, qualify and prepare a distinguished generation of imams and preachers.
The minister, also, noted that this year, the Holy Quran has been translated into the Urdu, Greek and Hausa languages, Gomaa announced.

The minister offered a copy of the Holy Quran to President Sisi.

President Sisi, then watched a documentary entitled "Egypt in the Service of the Holy Quran".

It shed light on an updated international competition in memorizing the Holy Quran, which now includes understanding and explaining the Quranic verses.

Addressing the ceremony, Grand Imam of Al Azhar Dr Tayyeb said Muslims should remain committed to commemorating the Laylat-ul-Qadr, the night when the holy Quran was revealed to the Prophet.
He said Quran has illuminated the whole world in such a short period of time, calling it a "divine light".
The Grand Imam said that Quran has come to put an end to chaos and turmoil, adding that it has also established a high-level moral system.

President Sisi then honored winners of the 28th international competition in memorizing the Holy Quran.

Abdullah Ali Mohamed Mohamed, from Egypt, was first and received a reward worth 180,000 pounds.

His compatriots Sarah Ayman Ahmed Moussa and Eman Gamal Farouk came in the second and third places, and received 120,000 pounds and 100,000 pounds, respectively.

President Sisi delivered a speech, in which he stressed the importance of enlightened religious discourse, believing it plays a key role in countering destructive extremist ideologies.

Sisi emphasized that hopefully, further effort would be exerted to promote the correct understanding of religion, saying: "Our main goal is to raise awareness of children and youth to be able to realize threats of the extremist ideology on the one hand and challenges on the other."

At the end of his word, President Sisi prayed to Allah on this sacred occasion to protect Egypt, saying he is looking forward to seeing a promising generation of young scholars and thinkers to contribute to addressing the current challenges.