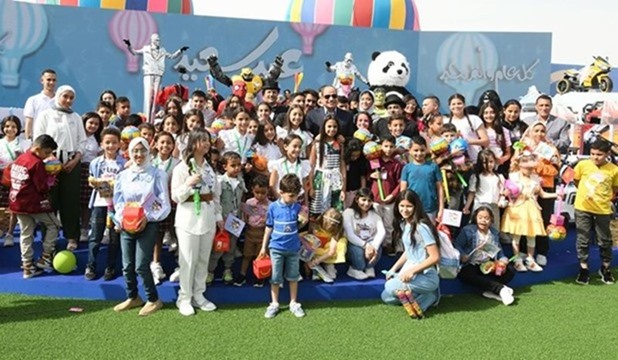 The celebration was held at the Al Manara International Conference Center after the Eidul Fitr prayers in.

Sisi met with families of martyrs of the Armed Forces and police, as well as military operations casualties.

President Sisi was keen to shake hands with a number of children upon his arrival at Al-Manara center and to talk to them as they walked next to him.

Sisi wished all those attending the celebration, and the Egyptian people, a happy Eidul Fitr.
The celebration included an operetta performed by a number of artists.

The well-known artist Mishary Rashed sang a number of Islamic songs dedicated to Egypt and its Islamic history.

Rashed expressed happiness to share the Eidul Fitr spirits with the Egyptian people and at the end of his performance, he prayed for Egypt.

Some children of martyrs offered a picture of Egypt's flag as a souvenir to President Sisi.

The president then posed for a photo op with the children.

President Abdel Fattah El Sisi voiced thanks to the cast of "Al Ekhteyar" and "Aadoun" TV series, screened during the fasting month of Ramadan.

Sisi said the two shows shed light on the heroics of the martyrs who sacrificed their lives for the sake of Egypt, saying: "It is an opportunity on the day of Eidul Fitr to greet you and thank you."

Commenting on the TV series of "Al Ekhteyar", President Sisi said: "The series tackled facts. Every word in this work is a reality that was necessary to be truly narrated to the coming generations so as children of the martyrs be proud of what their parents had done."

The president added that the events highlighted in the series were much less than the actual efforts exerted and are still being exerted in hard times of Egypt.

Sisi said:"We were keen that no clashes would occur, we did not assault or exercise tyranny, even when the statement of 2013 was delivered the words of "isolation of the president" or "terrorist group" were never mentioned."

Addressing the families of the martyrs, Sisi said "Do not ever believe that your sons and husbands have fallen victims in a battle of tyranny".

He called on Egyptians to preserve their country against the powers of evil.

The president said that the army had received three direct threats from the Brotherhood group.

One such threat was to the late Field Marshal Hussein Tantawi, who, according to Sisi, had been warned that the group would "set the country ablaze" if Mohamed Morsy did not win the presidential election.

He also pointed to statements by Khairat el Shaater, in which he had referred to a previous attempt to set the HQs of the national security on fire.

Sisi said El-Shaater had, on a different occasion, threatened him himself that the group would sabotage the country.

The president said that over the past seven years he had only referred to them as the "people of evil" in order to give them a chance to retreat.

Sisi prayed to Allah to guide all Egyptians to what's good for Egypt.

President Abdel Fattah El Sisi, afterwards, honored a number of families of martyrs of police and the army and medical teams during a celebration of Eidul Fitr.

The honored army martyrs are:

The president then had breakfast with the families of martyrs.

President Abdel Fattah El Sisi was, also, keen to participate with children of martyrs in the playgrounds during Eidul Fitr celebration and gave them sweets.

During the celebration, Sisi also shook hands with a number of artists, media men, athletes and public figures.

At the end of the event, he posed for a photo op with some of the children of martyrs.