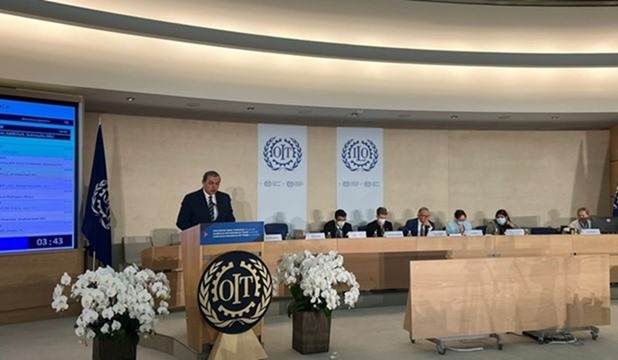 Before the 110th annual International Labor Conference, Egypt stressed that the (Covid-19) pandemic crisis had negative repercussions that affected all countries of the world, especially with regard to job losses and low rates of social protection.

In Egypt’s speech to representatives of “governments, business owners and workers” of 187 member states of the International Labor Organization, Minister of Manpower Mohamed Saafan said: “My country’s government was able, with the acknowledgment of all global financial and economic circles, to deal very professionally with this crisis by taking many measures Initiatives and actions to reduce its negative effects.”

Saafan added saying: "When countries began to shake off the dust of that crisis, and began to recover from it, they were stabbed by the Russian-Ukrainian war and the accompanying massive wave in the price hike of oil and food commodities due to the severe disruption of supply and supply chains."

The Minister of Manpower went on to say: With presidential directives, the Egyptian state has taken many incentive measures to deal with this current crisis by raising the rate of private sector participation in the implemented investments, supporting and settling the national industry and continuing to protect low-income people.

Saafan pointed out that in consolidation of the principle of equality and our belief in the importance of building a strong legislative backbone in line with international labor standards, a new draft law has been prepared in cooperation with the International Labor Organization, which is submitted to the Egyptian parliament in preparation for approval. This is in addition to issuing decisions related to regulating women’s work, as well as the decision on the participation of trade unions in the administrative organs of the state in collective negotiations and joining collective agreements.

Saafan indicated that all of these legislations are a natural extension of the trade union organizations law, according to which elections for membership of labor union boards of directors for the 2022-2026 trade union session were held last May.

The Minister of Manpower said that Egypt had viewed with great interest the report of the Director-General of the International Labor Organization, Guy Ryder, submitted to the conference under the title "The Least Developed Countries - Crisis and Structural Transformation", in addition to the issues it tackled of great importance related to the nature of labor markets and their challenges in the least developed countries. In addition to the importance of the role of structural transformation in achieving prosperity and sustainable development, as one of the most important objectives of the Fifth Conference of the Least Developed Countries, where its second part is scheduled to be held in Doha in March 2023.

At the conclusion of his speech, the Minister reiterated his congratulations to the Minister Gilbert Hongbo as the first African to assume the position of Director-General of the International Labor Organization, wishing him success and success.

He thanked Guy Ryder for all his contributions during his tenure at the head of our prestigious organization.

The Minister, also, extended his sincere thanks and appreciation to everyone who contributed to the work of that session.