President’s activities during May 2022 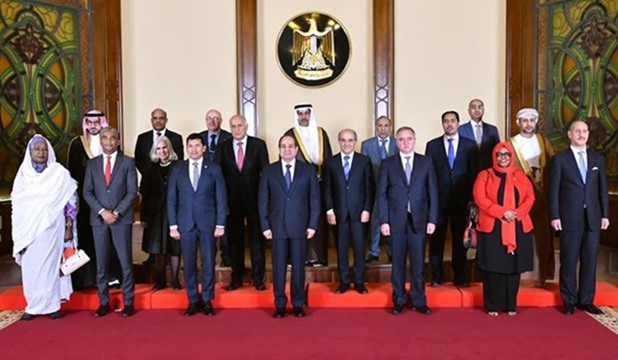 On May 7, 2022, President Abd El-fattah El-Sisi met with Prime Minister Dr. Mustafa Madbouly, and Lieutenant General Kamel Al-Wazeer, Minister of Transport, and Major General Ehab Al-Far, Chairman of the Engineering Authority of the Armed Forces, and a number of senior officials. The meeting discussed the developments of the executive position of a number of national projects for agricultural production and land reclamation, especially in  Tushka in the south of the valley and the New Delta in Al-Dabaa, as well as the governorates of Beni Suef and Minya. During the meeting, the president was briefed  on the details of the current and future stages of these projects, including the infrastructure and logistics of roads and axes, the provision of water , the application of the most appropriate modern irrigation methods, and electricity supply, within the framework of the state strategy aimed at increasing  agricultural land area all over the country, in a way that helps to develop the agricultural production sector and the related food and agricultural industries, as well as contributing to the achievement of self-sufficiency of exporting, which enhances the role of the national agriculture sector, and helps to provide thousands of jobs in various specialties.

On May 8, 2022, President Abd El-Fattah El-Sisi chaired a meeting of the Supreme Council of the Armed Forces.


On May 9, 2022, President Abd El-Fattah El-Sisi met with Dr. Mustafa Madbouly, Prime Minister, and Dr. Asim Al-Jazzar, Minister of Housing, Utilities and Urban Communities. The meeting reviewed the developments of the Ministry of Housing's projects related to "Decent life" initiative.

The President directed to continue cooperation and coordination between the concerned state agencies to implement the various national projects related to the "Decent Life" initiative for the development of the Egyptian countryside.   The President also followed the ongoing projects to develop the historical Cairo area, which aims to restore the civilizational face of Cairo in line with its ancient history, especially at the tourist, entertainment and cultural levels, including the ongoing development process in the Ain Sira Park and the surrounding areas, as well as the development of the Maspero Triangle, in addition to the development of the Nile Corniche through the Mamsha Ahl Masr (The Walk of Egypt's People) project, which is one of the important recreational and tourist projects.

The executive position of facilities, installations and services in various new cities and urban communities at the level of the Republic was also reviewed, especially with regard to the new administrative capital and the New Alamein.

On May 10, 2022, President Abd El-Fattah El-Sisi met with the Economic Ministerial Group. The meeting was attended by Dr. Mustafa Madbouly, Prime Minister, Mr. Tariq Amer, Governor of the Central Bank, and a number of ministers. The meeting dealt with the follow-up of the work of the Economic Ministerial Group, and the procedures for dealing with the repercussions of the global economic crisis.

On May 12, 2022, President Abd El-Fattah El-Sisi met with Major General Amir Sayed Ahmad, advisor to the President of the Republic on urban planning, Major General Ihab Al-Far, head of the Engineering Authority of the Armed Forces, and Dr. Tariq Al-Khudairi, director of the "Ibdaa'" Marble Factory. The meeting dealt with the follow-up of the structural and engineering position of a number of the Authority's engineering projects under way in various sectors in the new administrative capital, especially with regard to the headquarters of the strategic leadership, as well as the architectural and construction works.  The President was also briefed on the work of the network of axes within the administrative capital.

The meeting dealt with the follow-up of national projects for the Communication and Information Technology sector to attract investments. The President directed the following :

- Establishing companies through digital notification through a platform established for this purpose, within the framework of removing all obstacles to start-ups and entrepreneurs .

- Allowing the opening of virtual companies without restricting them to have an actual headquarters, with the aim of saving expenses and facilitating procedures for those companies .

- Facilitating the requirements for the establishment of one-person  companies .

- Expanding the establishment of  technology investment free zones, as well as expanding tax exemptions for start-ups .

With regard to the projects of the Ministry of Communications related to human development and human building, the President directed to expand the "Digital Egypt" Initiative, which targets the top graduates of specialized universities. He also called for the immediate launch of the "Digital Egypt Cubs Initiative" (DECI), which seeks to train outstanding school students in communications and information technology sciences .

The Government's efforts to move to the new administrative capital were also reviewed. The Minister of Communications explained that the Government had completed the digitization of all paper files in all ministries and government agencies, which amounted to approximately 150 million documents .

On May 18, 2022, President Abd El-Fattah El-Sisi met on with Dr. Muhammad Awad Taj El-Din, advisor to the President of the Republic on health and prevention affairs. The meeting addressed "following up the executive position of a number of different national health initiatives, as well as the current situation regarding the Corona virus." The President  directed to continue the awareness-raising programmes and vaccination campaigns for citizens through vaccination centres throughout the Republic. With regard to the various national health initiatives, the President was briefed on the latest developments on the initiative to end waiting lists for critical surgeries. He directed to make the best use of the capabilities available to all institutions of the medical system, whether affiliated with the Ministry of Health or university hospitals. The President also followed up on the work of the Tumour Diagnostic and Treatment Initiative for Women and the latest developments in providing the latest equipment  in this regard, as well as efforts to prevent polio. The president directed to strengthen awareness campaigns to ensure that all newborns receive vaccinations against polio.

The meeting dealt with "Green Hydrogen Production Projects at the Republic Level ".

The meeting dealt with the projects of the Egyptian Rural Development Company on land reclamation.

On May, 2022, President Abd El-Fattah El-Sisi met with Major General Muhammad Zamlout, Governor of the New Valley. ”During the meeting, the President was briefed on the executive position of the various strategic projects in the New Valley Governorate. He directed to continue the implementation of development plans in the Governorate to make the best use of the available investment opportunities,  to achieve the maximum economic and service return for the people of the Governorate .

The progress of the presidential initiative to plant 2.5 million palms was also presented. It aims to expand the production of dates in the New Valley Governorate.

During the meeting, the President stressed the importance of joint military cooperation within the framework of the strategic relations between Egypt and the United States, which represent a fundamental pillar for the maintenance of peace and security in the Middle East region, especially in light of the current circumstances, which require the concerted efforts to face the challenges that threaten security and stability, foremost among which is terrorism. In this regard, the president reviewed Egypt's efforts to eradicate terrorism.

The meeting discussed ways to enhance military and security cooperation between Egypt and the United States, as well as cooperation in the fields of counter-terrorism, joint training programs and border security. The latest developments were also discussed with regard to a number of crises and files in the region, especially the security of the Red Sea, where it was agreed to continue regular bilateral consultation and coordination between the two sides on issues of common interest to the two friendly countries.

On May 11, 2022, President Abd El-Fattah El-Sisi received  Jake Sullivan, the US national security adviser, in the presence of US Secretary of State Sameh Shoukry, Major General Abbas Kamel, the head of the General Intelligence, along with Ms. Nicole Champion, the US ambassador to Cairo, and a number of senior officials. The US advisor on national security conveyed to the president the greetings of the US President. .

For his part, the President requested that his greetings be conveyed to US President "Biden," stressing Egypt's keenness to strengthen and consolidate its extended strategic partnership with the United States, as well as intensify cooperation and coordination between the two countries at various levels, within the framework of the common interests of the two countries. This aims to support efforts to restore security and stability in the Middle East .

The meeting tackled the developments in the Palestinian Cause. The President stressed that solving the Palestinian Cause according to the international terms of reference would impose a new reality and open up broad prospects for building peace and building bridges of trust, cooperation, construction and development throughout the Middle East region. The US National Security Adviser expressed the great appreciation of the US administration for the Egyptian efforts to establish peace in the region .

They also discussed the new developments in a number of regional issues .

On May 17, 2022, President Abd El-Fattah El-Sisi received in Al-Itehadya Palace, the heads of churches participating in the General Assembly of the Council of Churches of the Middle East, whose current session is being held in Cairo, in the presence of His Holiness Pope Tawadros II, and Mr. Sameh Shoukry.

On May 17, 2022, President Abd El-Fattah El-Sisi received African presidents and representatives of state councils and supreme administrative courts, who are in Egypt to participate in the establishment of the Union of African State Councils and Supreme Courts. This comes within the State Council's celebration of the Diamond Jubilee on the occasion of its 75th anniversary, with the participation of Counselor Omar Marwan, Minister of Justice, and Counselor Muhammad Hossam El-Din, President of the State Council.

The spokesperson for the Presidency of the Republic said that the President had welcomed the meeting of Arab Ministers of Youth and Sports on the sidelines of the forty-fifth session of their Council in Cairo. He affirmed that the youth sector is considered an essential dimension of the national security of States and that it was of great importance to build a genuine understanding and awareness of youth in a way that promotes stability, security and peace.

The President also stressed the importance of educating Arab youth to engage in digital transformation, software and accelerated technological progress, which greatly affect the future of employment opportunities.

The meeting witnessed an open dialogue and exchange of views between the President and the group of ministers on the various Arab experiences in youth work. They also discussed how to benefit from them in supporting youth dialogue and providing a space for consultation between youth community cadres in the Arab world in order to develop youth visions of the challenges facing them.