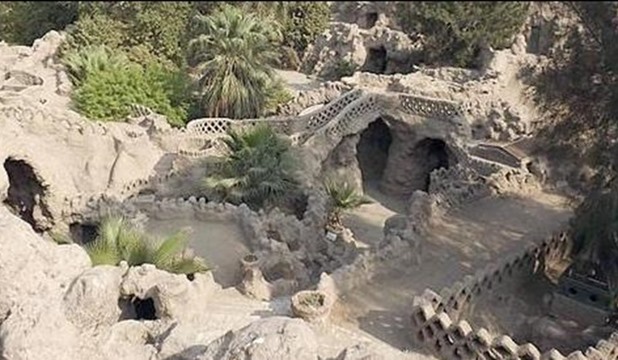 The Aquarium or Jabalia Garden, located in Zamalek on Jabalia Street in Cairo, was established by Khedive Ismail in 1867, and is considered one of the best gardens erected during the Khedive era in Cairo.

The park has been managed by the Giza Zoo Administration since 1902 and has repaired 24 tanks to display 33 species of indigo fish before officially opening the park to the public on November 21, 1902.

The park was closed in 1965 AD for a long time to repair and renovated, and the reform was supervised by scientific and engineering bodies affiliated with the Egyptian Ministry of Agriculture, and it opened again in 1983.

It has an area of ​​about nine and a half acres, in addition to the collection of botanical gardens adjacent to it.

The beauty of the aquarium is not only in its exquisite design, but also in the use of materials for the designs of buildings built from Aswanli clay mixed with estromel and red sand, as well as bricks made from a mixture of Aswanli clay and supporting solid materials to create architectural formations in the form of fish gills so that the design of the Jabaliya resembles a fish, All this led to the general view of Jabalia to be very splendid and beautiful.

The architectural style of the garden is characterized by its being built in the shape of Jabalia, which is why some called this garden: Jabalia Garden.

Description of the park

The garden consists of a two-hole entrance resembling a fish gill opening and behind it is the lobby area. On the side of the two openings, there are side fins behind the four garden walks.

As for Jabalia from the inside, it was taken into consideration when designing that it should be in the form of corridors or cavities within the coral reefs found in the sea.

If you look at the ceiling of one of the corridors, you will find it as one among the other alcoves created by the waves, designs that play melodies when the air passes through them, similar to the great movement of water, through the movement of air rushing from the four entrances, and moving between the caves.

Outside of Jabalia, there are paths separating the green areas containing rare trees specially brought from Madagascar, Australia and Thailand, where the rare forests are characteristic of these areas, and in the dark places of the paths the electric light is shed wonderfully artistic. Way.

The park has caves and walkways for visitors to walk. The park includes 49 aquariums of diverse and rare fish that reflect the sun's rays through the upper openings, such as indigo fish, marine fish and ornamental fish.

It also has a panorama showing stuffed fish, and there are other sections featuring species of turtles and marine reptiles that live in the swamps. And rivers, and at the front of the garden there is a large aquarium with predatory fish such as shark, pigfish and others ...

Jabalia includes four fish hatcheries in addition to a main hatchery and two greenhouses to treat the water necessary for the life of thousands of fish, which are housed in large ponds, including 24 aquariums for freshwater aquarium fish.