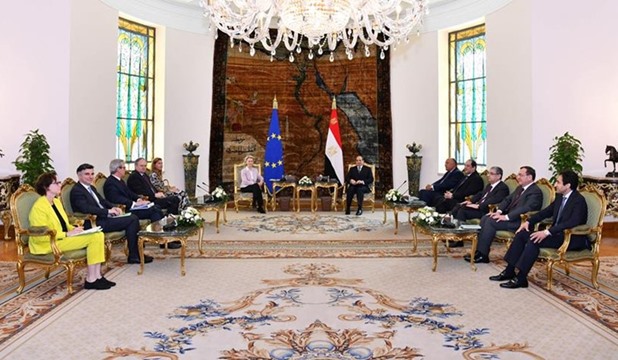 The Spokesman for the Presidency stated that the President welcomed Mrs. von der Leyen ‘s visit. His Excellency stressed the deep and strong relations and ties between Egypt and the European Union, particularly in light of the common challenges they face on both sides of the Mediterranean as well as the negative repercussions of the successive international crises during the recent period on the international economy especially in the areas of energy and food security.

The President of the European Commission expressed her honor to meet President El-Sisi. She praised the distinguished historical relations between the European Union and Egypt, especially that Egypt is a hub for security and stability in the region that is currently going through a critical stage of severe turmoil, making it an important strategic partner to the European Union.

The meeting discussed various aspects of cooperation and mutual dialogue between Egypt and the European Union in all political, economic and security fields, especially with the forthcoming adoption of the EU-Egypt partnership priorities for 2021-2027. The partnership priorities would define cooperation paths between the two sides in the upcoming years. The President of the European Commission stressed the European side’s interest to strengthen cooperation with Egypt in the energy sector, particularly liquefied natural gas, since Egypt is rich with resources and has a distinguished infrastructure. This is in addition to the fact that there are two natural gas liquefaction stations in Egypt in Edku and Damietta, which allow the export of gas and contributes to cooperation in the clean and renewable energy sector to make use of Egypt's resources, especially solar and wind energy.

The Spokesman added that the meeting discussed coordination efforts between Egypt and the European Union on many important regional and international issues, mostly at the level of the peace process in the Middle East. The President of the European Commission praised the tireless and continuous Egyptian efforts regarding Egypt's initiative for the reconstruction of the Gaza Strip.

The issue of the Renaissance Dam was also discussed in the meeting. President El-Sisi stressed Egypt's firm position on preserving its water rights through reaching a balanced and legally binding agreement. The agreement shall ensure clear rules for the process of the filling and operation of the dam and shall achieve the common interests of all parties. President El-Sisi stressed the importance of the water issue to Egypt as it touches the core of Egyptian national security.

They also discussed Egypt’s ongoing preparations, both at the organizational and thematic levels, to host the upcoming COP27 Global Climate Change Summit. President El-Sisi stressed that Egypt attaches great importance to this summit for it to be an opportunity to build on the results of Glasgow Climate Change Conference last year and to have implementable results concerning issues of adaptation and financing to support the developing countries. 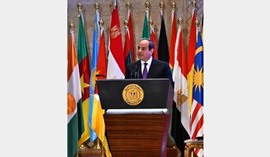 Statement by H.E. President Abdel Fattah El-Sisi at the Inauguration of the Eighth OIC Ministerial Conference on Women