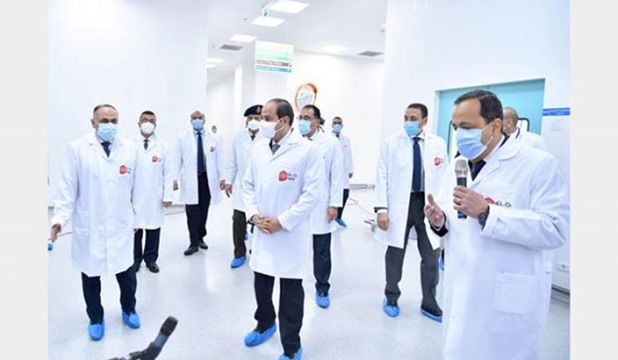 Over the eight years of President Abdel Fattah El Sisi’s rule, the health sector received the largest share of attention from the political leadership. The government is keen to work in two main directions in the health file for Egyptians.

The first is based on the rehabilitation and development of health infrastructure to keep pace with the development in service performance, while the second is to launch a package of health reforms.

In conjunction with the eighth anniversary of Sisi’s assumption of the country’s leadership, Sada El-Balad website reviews the most prominent gains and achievements made by the political leadership for the benefit of the health sector, in the context of the following report:

The “100 Million Health” initiative includes the elimination of Hepatitis C. It is one of the most important health initiatives launched by Sisi, and aimed at conducting a comprehensive survey to detect and treat Hepatitis C, as the state’s efforts in this field were well received by major health institutions in the world, such as the World Health Organization which praised the treatment of 3 million Egyptians from Hepatitis free of charge.

The political leadership pays special attention and support to the provision of health care to citizens, as it is a basic pillar in the strategy of building the human being, and it is also one of the goals of sustainable development.

The comprehensive health insurance system, as a mandatory system, is based on social solidarity, to provide health coverage for 100 million Egyptians according to the highest International quality standards, while preserving the right of those who are unable to receive treatment free of charge.

Within the framework of the state’s efforts to build the Egyptian person in terms of health, President Sisi launched an initiative to support the health of Egyptian women, to raise awareness of the importance of early detection of breast cancer, and means of preventing this disease, as part of a strategic plan to promote healthy lifestyles and provide comprehensive and integrated medical care.

Providing the family in the intensive care

This is in addition to his keenness to provide the number of beds in the intensive care unit, and it has doubled exponentially, in order to lay the foundations of an integrated health system for the Egyptian citizen.

Screening for obesity, anaemia and dwarfism

President Sisi did not neglect the provision of health protection for children, but rather ensured them to live in a safe environment in which they could enjoy.

From this point of view, the initiative was launched to detect diseases of obesity, anaemia and dwarfism, to treat anaemia free of charge, in addition to raising awareness and distributing treatment to children against obesity and thinness.

The initiative, which revealed many cases, with periodic follow-up in health insurance and the provision of free treatment to all.

This initiative was launched at the beginning of July 2018, and the initiative included quickly ending the waiting lists for patients with surgeries and critical medical interventions, within a period of six months and free of charge, at a cost of one billion Egyptian pounds over a period of 3 years, noting that the average number of operations performed therein amounted to more than 1,000 operations per day.

The Medicine City is one of the most important national projects that the state sought to implement in order to possess the modern technological and industrial capacity in this vital field, allowing citizens to obtain high-quality and safe drug treatment, preventing any monopolistic practices and controlling drug prices.

The Medicine City is one of the largest cities of its kind in the Middle East on an area of ​​180,000 square meters. It is equipped with the latest technologies and global systems in drug production to become a regional center that attracts major international companies in the pharmaceutical and vaccine industries’ fields.