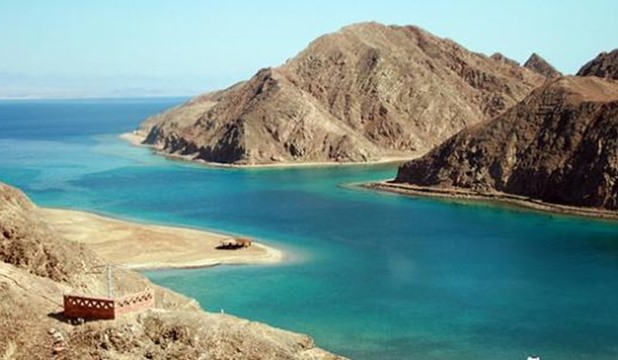 It is  in the eastern Sinai peninsula of Egypt, marks the location of the southern border crossing between Egypt and Israel, servicing travelers coming into Egypt and Sinai via Eilat. The town has grown up around the border crossing and offers basic amenities for travelers

-These will no doubt be greatly enhanced when a new "Taba Heights" development gathers pace.

-Taba is a relatively minor centre for Red Sea diving.

-Taba was on the Egyptian side of the armistice line agreed to in 1949, and returned to Egypt when Israel withdrew from Sinai in 1957.

However, when Egypt and Israel were negotiating the exact position of the border in preparation for the peace treaty, Israel claimed that Taba had been on the Ottoman side of a border agreed between the Ottomans and British Egypt in 1906 and had therefore been in error in its two previous agreements.

After a long dispute, the issue was submitted to an international commission composed of one Israeli, one Egyptian, and three outsiders.

In 1988, the commission ruled in Egypt’s favor and Israel returned Taba to Egypt later that year.As part of this subsequent agreement, Israeli travelers are permitted to visit Taba visa-free for up to 48 hours, making Taba a popular tourist destination.

Attractions and Excursions in Taba: Pharaoh’s Island: One of Taba’s main attractions, Pharaoh’s Island, is simply breathtaking. The small island, surrounded by outstanding blue and turquoise waters of the Red Sea, was once a Phoenician port, later occupied by Crusaders and then taken under control by Sultan Salah El Din. The island and the castle remain intact. The reef around the island is popular with snorkelers and divers alike.

The Phoenicians were the first to make use of this island’s fine natural harbor during the 10th century BC to foster trade with Egypt. Much later the small rocky island came under Byzantine control.

Early in the 12th century the Crusaders built a fortress there to protect pilgrims traveling between Jerusalem and the Monastery of St Katherine and to boost Arab trade.

Sultan Salah El Din (Saladin) evicted the Crusaders from the island and significantly strengthened the fortress later in the 12th century.

The Mamelukes and Ottomans probably further fortified it when they became the dominant force of the region.

Today you can follow in the footsteps of the legendary Lawrence of Arabia and explore the fully renovated fortress of medieval character with its towers, arched doorways, sleeping quarters, baths and kitchens

Mount Sinai, just south of the Monastery of  St. Katherine, is of great religious importance to Jews, Christians and Muslims. According to the Old Testament this is where Moses received the Ten Commandments.

Throughout the centuries the mountain has drawn thousands of pilgrims from all over the world. You can ascend to the summit (2285 m, 7497 ft) to experience the ultimate spiritual elevation; either by climbing some 4000 steps built by monks or by following an easier but longer path.

Both lead to an open area known as Elija’s Basin where you walk up the remaining 750 steps to the top.

At the summit you will find the Chapel of the Holy Trinity that was built in 1934 on the site of a much earlier chapel built in 363 AD. The climb takes about three hours but the view from the top is truly breathtaking, especially at sunrise.

The Monastery of St. Catherine lies at the foot of Gebel Musa, or Moses Mount, in the heart of the South Sinai.

In 330 AD the mother of Emperor Constantine, Empress Helena, ordered the construction of a small church by Moses’ Burning Bush.

It was called the Church of the Transfiguration. The fortified monastery we see today was built around this church during the reign of Emperor Justinian (527-565 AD).

In the 11th century the monastery was dedicated to St. Katherine of Alexandria, who had died in 310 AD. Her remains, reportedly found by monks on a mountain peak next to Mt Sinai, are buried in the monastery’s Basilica.

Fronted by gardens and cypress trees, the monastery is owned and run by the Greek Orthodox Church. Its rich library houses the world’s second largest collection of illuminated manuscripts after the Vatican. You can see the Burning Bush and a large number of antique works of art: invaluable icons, beautifully carved doors, exquisite wall paintings and other fine religious ornaments.

The Museum at St. Catherine Monastery:In February 2002, within the monastery’s towering walls, one of the world’s finest and most unique collections of Christian artifacts has been made more accessible to the public. A small yet extraordinary nine-room museum, referred to as "The Sacred Sacristy", was opened to display masterpieces of the highest artistic value.

Among the tastefully displayed exhibits are exquisite 6th century Byzantine icons, delicate 9th century manuscripts written in Syrian, rare Slavonic prayer books, including splendid objects of silver, gold, ivory and precious stones. Perhaps the most valued items on exhibit, presented in a special glass case, are pages from the Codex Sinaiticus, a 4th century version of the Bible that now rests in the British Museum.

Now you can see the Monastery’s coveted collection, while listening to gentle Byzantine hymns in an atmosphere of splendor and reverence. The museum is open from 9 to 12 am every day except Fridays, Sundays and religious holidays.

Ein Kid:One of the jewels of Sinai, Ein Kid is a palm-filled oasis at the end of a pastel colored path. Promising shade and tranquility for every visitor, Ein Kid is the perfect remedy for the stress of urban life.

The walk from Wadi Kid to Ein Kid is stunning as you spot the water flowing down from the oasis. The path is flanked by awesome granite boulders hovering, as you ascend into the oasis. You will feel so small in the shadows of these stupendous creations.

When you set your eyes on the oasis, you will be amazed by the contrast of colors created by the desert landscape and the lush trees. Complete with date palms, acacias, and fruit bearing trees, Ein Kid is the ultimate place for an afternoon picnic and a hike. You can organize a day trip or camping trip from Sharm el Sheikh or Dahab.

The Blue Desert:The most amazing thing about the Blue Desert isn’t the blue paint on the rocks; it is the wadi itself - against the backdrop of the legendary blue Sinai sky. Massive granite sculptures and golden boulders cover the desert floor along with beautiful pink flowers dotting the plains. The Blue Desert is a great place for climbing, taking pictures or just getting away from it all.

In 1980, Belgian artist Jean Verame came to Sinai to paint a line of peace. With the permission of Anwar Sadat and a grant of ten tons of paint from the UN, the artist managed to paint four miles of Sinai. One year later, a stretch between Dahab and St Katherine was blue; hence, the name became the Blue Desert.

Located between Dahab and St Katherine, you can easily see this site in one day. However, it is a great place for camping.

Coloured Canyon:One of the natural wonders of Sinai, the Coloured Canyon is awe-inspiring. Take a walk in between dramatic sandstone canyon walls streaked with melting yellows, purples, reds, magentas and gold. In certain places the canyon walls reach up to 40 meters.You feel as if you are enclosed in a spectacular colouring book.

Formed by the natural elements over centuries, the walls of Coloured Canyon cascade with colours as a result of ferrous oxide and manganese.

Consequently, a natural maze has been formed that is excellent for exploring and taking photographs. A haven of tranquility,Coloured Canyon promises its visitors peaceful moments and quiet.

Abu Galum Protectorate:Abu Galum Protected Area, along the Gulf of Aqaba between Dahab and Nuweiba, is a 500 km2 natural wonderland. Shell speckled gravel beaches run parallel most of the way to the splendid coral reefs below, unless rudely interrupted by plunging mountainsides. Close examination of the beaches will expose masses of Nerita splendors, a tiny snail whose decorative shell blends seamlessly into the pebble mosaic.

Inland into the park, deep wadis interlace with massive granite mountains that are intermittently cut by dark dolerite dykes. Out of a total 167 species recently recorded in this environmentally unique region, as many as 44 plant species are endemic. Mammals seem to like this plant diversity. Nubian ibex, hyrax, red fox and striped hyena thrive here, as well as a variety of lizards and snakes, including the black cobra, the horned viper and Burton’s carpet viper.

Ein Khadra:Tucked away between yellowish sandstone cliffs not far from the road linking St. Catherine with Nuweiba and Dahab is one of Sinai’s most scenic oases. Its Arabic name Ein Khadra (Green Oasis) perfectly describes this attractive locale where gushing fresh water springs nourish date palm gardens in the seemingly barren desert.

When approaching from the south you’ll be greeted by a splendid panorama view of the small oasis glaring brilliantly in the distance below. If you enjoy observing dramatic geological landscape, a walk through the White Canyon that flows into Ein Khadra from the southeast is surely worth the effort.

More than just a pretty spot, Ein Khadra is also historically significant. It acted as an important stopover for pilgrims traveling the St Katherine-Jerusalem route.

Ancient writings and drawings on the nearby Rock of Inscriptions testify that Nabateans, Greeks, Romans, Byzantines and Christians of the Crusader period passed through here. Have your camera ready!

Although not as dramatic as Sharm el Sheikh’s walls or Marsa Alam’s offshore reefs, the Taba coast offers some very rare marine life in a non-crowded environment.

Typical to the area, for example, is a rare species of frogfish, and many species of seahorses, hardly found anywhere else in the Red Sea, making a diving holiday in Taba a unique one.

Most of the dive sites in Taba are situated along the Red Sea coast, in the fringing reefs which adorn the Taba shoreline. They are mainly reachable by boat, but some have shore access from the hotel, and others and can be reached by car or jeep. Local dive boats leave every day for day or half-day diving excursions.

The Taba dive sites are, in general, also easily accessible to snorkelers.

The Taba marine area is protected, as many other areas in Egypt, and diving centers here operate under environmental-friendly procedures. This year, a group of local investors have sponsored a mooring buoy project for the diving boats in the region, installing a total of 16 buoys in the most frequently visited dive sites.

Taba Diving Services: Most resorts in Taba have reliable and well-organized diving centres, which offer all sorts of scuba diving services, from entry-level courses to professional courses, introductory dives and diving packages, with one, two or more dives per day, for those who are certified. Some diving centres are also geared up to cater to technical divers. The area seems to be ideal to try out or practice with retreaters.

For the non-licensed diving enthusiasts, most centres offer free of charge pool intro’s, where visitors can experience the thrill of scuba diving on a one-to-one basis with a diving instructor in the hotel’s swimming pool. The Taba diving centres also offer experience programmes, where the visitor can try actual dives in the sea straight away, under the strict supervision of a diving professional.

Taba, with its generally calm weather conditions and lack of currents, is an ideal location of the Red Sea Riviera to learn to dive, and most diving centers offer the full range of beginners’ courses. Even kids from 8 years on can enroll in children-dedicated scuba diving activities, such as the popular bubble-maker course, where kids learn to be familiar with water and scuba diving and have fun swimming around in a confined water area.