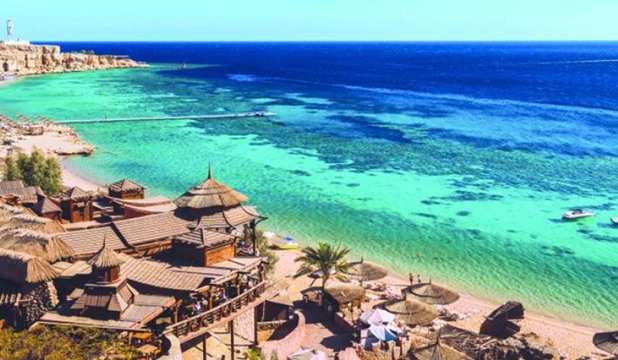 It  is considered to be among the most charming picturesque ‎destinations in the world, with its majestic mountains, luxurious beaches and beautiful clear water.

Sharm El-Sheikh, the biggest and most important city of Sinai, lies at the southern flank of the Peninsula where the two gulfs of Aqaba and Suez meet with the Red Sea.

This led to have more distinctive environment which is the key element in the tourist attraction. Thus, at Sharm el-Sheikh there is the most important nature reserves as in Ras Mohammed and Nabq. The most important areas as well as Ras Nasrani; Ras Umm Sid along with Ras Mohammed.

Every day Sharm el-Sheikh is witnessing a new. So Every time you visit it you realize something different. Today is different from yesterday. This is the truth that has turned it with its vast desert and high mountains to a modern city in 10 years only.  For this reason Sharm el Sheikh is qualified to win the top five cities peace in the world among the 400 global city.  It has been given the finest city in the world for peace and ‎beauty by the United Nations Educational, Science, ‎and Cultural Organization, the UNESCO.

Sharm el Sheikh real development process has begun according to specific goals. It has been summarized as follows:  Firstly, to preserve the natural resources that are available in the city.  Secondly, Not to touch the wild flora and marine environment. Thirdly, Establishment of new society  that applied non-traditional policies, and take advantage of the unique Sharm Sheikh site and turn it into a Worldwide  tourist center  that are capable of competing with other global tourism centers in Europe, Asia and America.

Sharm el Sheikh is currently linked to the rest of the touristic areas in Egypt by land, sea and air, as well as foreign tourist markets, the Arab and the international one.   Besides, stability within the local community, investors and city visitors.

Sharm el-Sheikh has been chosen as the best city of peace around the world because of the many conferences and meetings that were held over its territory demanding a just and comprehensive peace in the Middle East.

Additionally, Sharm el-Sheikh attracted marine lovers from all over the world and all ages. It has hosted youth camps from most parts of the world as well as other advantages that Sharm el Sheikh is distinguished with as unique charming nature of its mountains; golden beaches, azure waters, charming coral reefs with its own depths that attract divers and researchers in the depths of the pristine nature of up to 250 of coral reefs and thousands of fish and marine creatures.

Sharm el-Sheikh is considered one of the newest recreation and relaxation areas in the world, where 150 hotels have been built to be a resort within ten years, that the hotel itself is a mean for fun and recreation. It never allow the tourists to search for another place for entertainment, there are luxury restaurants that providing oriental and Western cuisine, as well as cafes and nightclubs.

There are also multiple activities, from horseback riding, play tennis, the amusement of children, water skiing, snorkeling or scuba diving or water excursions to enjoy the natural wealth water that Tourists can see it in the sea, on his boat or its glass.

Sharm El-Sheikh has strong infrastructure facilities and services.  Its population is increasing rapidly as it is currently about 10,000 and it is projected to reach 132, 000 inhabitants in 2017. Its area is about 424 square kilometers

Diving: Diving is one of the important hobbies that spread nowadays in Sharm. As the No. of athlete practicing this hobby reaches 100,000 one.

Ras Mohammed is Egypt’s first protected area that is a world-famous area with several top diving locations. It is a cape formed by ancient corals; you can see those emerging on the surface of the sea. It is indisputably one of the most beautiful places in South Sinai. Due to currents carrying out of the Gulf of Aqaba, the underwater inhabitants of the area are simply exceptional and a lot of fish come here from the open seas in the search for food and shelter: you’ll observe an unperceived abundance of hard and soft corals, as well as big schools of tunas, barracudas, jackfish and even sharks. Only to name a few, Shark and Yolanda reefs are “the” Red Sea dive.

Strong currents bringing in a wide variety of fishes made the spot one of the most perfect sites for underwater photography.

- Ras Umm Sid area - and even in the north beginning of Aqaba Bay Tower area. The region has more than 20 training center recognized internationally and dive trainee is given a license to dive and be inspected by international organizations (PADI)

Sailing:  Visitors comes from all over the world to enjoy the atmosphere, the sea and the water sports that have been served by more than 50 hotels and 100 diving center area.

Fishing:  Sharm El-Sheikh has the largest amount of different types of ornamental fish and catches fish, so there is an annual international competition .It will be attended by professional sports fishing from all over the world and provide them with awards

Location: North east of south Sinai, near by the Gulf of Aqaba

Objective: Protection of the Coral reefs and Mangroves.

Objective: Protection of the Coral reefs and the Mangrove Avicenna marina.

Sharm El -Sheikh as a Land of peace

-Sharm el Sheikh City has always been referred to as the land of peace. This is because its lands have witnessed a lot of political; scientific; and touristic conferences.

Egypt’s president has hosted a lot of World Wide figures with holding a lot of conferences in order to support world peace in general. Those conference are as follows:

1- Peace Summit in 1996, which has been attended by many Arab and International heads of State.

2-Group of 15 summit, which has been held  for the first time in Egypt in 1998 in Sharm el-Sheikh. This Summit would be held alternately in one of the group states.

3- Wye River Memorandum:  It was an agreement between the Palestinians, who was represented by Yasser Arafat leader and Israel who was also represented by Ehud Barak, in September 1999.

King Abdullah of Jordan, President of Egypt, was attended with US Madeleine Albright and Secretary of State.

4-The tripartite Sharm el-Sheikh summit, which was attended by the Egyptian President and leader Arafat and Israeli Prime Minister at Camp David.

5-The summit of the Egyptian  President and the Crown Prince of Saudi Arabia Prince Abdullah in Sharm el-Sheikh to review the Arab situation ,the peace process and bilateral cooperation.

6- Trilateral Summit which brought together Egyptian President ,the Crown Prince of Saudi Arabia Prince Abdullah and Syrian President Bashar al-Assad to discuss the ongoing process of peace in the Middle East and focus on the Syrian-Palestinian area in the negotiations.

- The summit that brought together presidents of Egypt and Syria in 1998 to review bilateral relations and the latest developments on the Syrian-Turkish  Adana agreement regarding the level of security between the two countries .

The two leaders had talks about peace process and the resumption of negotiations on both tracks the Lebanese and the Syrian one.

8-bilateral summit between both leaders of Egypt and Jordan to discuss the deteriorating situation in the occupied territories and paving the way for an Arab summit.

9-Sharm el-Sheikh summit that was held in October 17, 2000. It was considered a high summit. As, the Egyptian president has called for this summit together with  the international community and the United States to put an end to the violence that has been carried out by Israel in the occupied territories.

On the sidelines of this summit different meetings were held among African, Arab and European countries .It was not only confined with political field but also included industrial ,economic and touristic conferences .

12-On 3rd June 2003, Arab-American summit was held in Sharm el-Sheikh. The summit discussed the peace process in the Middle East and the situation in Iraq as well as the fight against terrorism.

Since peace is one aspect of peaceful co-existence on the one hand and to avoid the horrors of war on the other hand.

Thus, we should have transferred to the new generations the urgent need for peace based on justice and equality.

Under just and comprehensive peace logo, Sharm el-Sheikh city to host the masses of young people worldwide to establish their camps on its land.

Under the slogans of peace and friendship, those meetings grouped different religions, races and colors of love and brotherhood.

-On August 1997, Work camp has been held at Sharm el-Sheikh that brings together 150 participants from 20 European, African and Arab countries.

- On 1998, another camp was organized with over 300 young people from thirty countries, in an atmosphere of friendship and love for peace, expressing their eagerness to achieve world peace.

-On, 1999, Fifty states have joined those camps, which have become one of Sharm el-Sheikh landmarks. The participants in those camps have expressed their adherence to just and comprehensive peace .Those camps have also included different types of sports and cultural games.

-Operation of Sharm el-Sheikh port after its development

Sharm el-Sheikh port has witnessed a comprehensive development of the movement, including the establishment of a deep and graded quay at a total cost of LE 40 million, where the port has been operated in 2006 after the end of the development works.

-On May, 2007 the new terminal building at Sharm el-Sheikh International Airport was opened. It was established over an area of ​​45 thousand square meters to reach a capacity of carrying 6.3 million passengers per year at a total cost 495 million pounds.