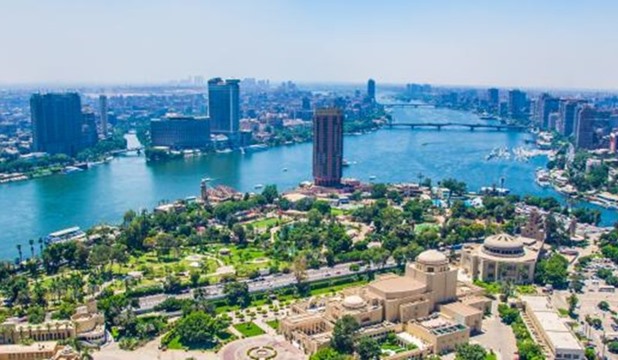 It  is the capital of the Arab Republic of Egypt. Cairo was founded on July 16, 969 AD by the Fatimid leader Jawhar Al-Sequilli, by an order from the Fatimid Khalif Al-Mo'izlideenellah. It was named "the city of the 1000 minarets.

Cairo is known as “Men Nefer” in the Pharaonic era. That is to say a beautiful port city and its suburbs is the Sun City. It is also called “Oun" by Hieroglyphs. It so called “Heliopolis” by Greek. It is considered Egypt’s capital since King Narmer united it since 3200 years BC at different periods of time, but when the Arab’s inaugurated Egypt, it has become its capital.

Cairo is one of the eastern cities that distinguished for writing and history. It has been called also as the “City of a thousand Minarets”, for having hundreds of big and small mosques in every corner. It is so called Al-Mu'izz's Cairo).

The name al- qahira didn’t exist until the last of these was created in 969 AD as Capital of Egypt under the Fatimid’s , before this city came a succession of capitals beginning with al fustat 641 AD, the Abbisid foundation of Al Askar 750 AD and the Tulunid establishment of Al Qatai 870 AD.

Cairo is located on the sides of the River Nile Islands in southern Egypt, directly at the south east of the point where the Nile has left its valley and confined to desert divided into two branches within the low Nile at the Delta region. And the oldest part of the city lies at the east of the river. There, the city was circulated at the west gradually, and the western part has been built on Paris model by Egypt's ruler Khedive Ismail in the middle of the nineteenth century. It was marked by extensive areas, public parks, and open areas.

While the oldest eastern section of the city differed significantly after its expansion randomly over the centuries, and it was filled with small roads and crowded buildings. While west of Cairo was filled with governmental buildings and modern architecture, and it has become the most important part in Cairo.while the eastern half is the part who has a history of the city over the ages because there are its mosques and churches Vintage and antique buildings and ancient landmarks .

Egyptian styles changed remarkably little over time. Much of the surviving art comes from tombs and monuments, which have given more insight on the Egyptians' belief of the afterlife.

Arts architecture varied in Cairo according to the historical period that has been erected in.

-Fatimid and Mamluk era: It has been characterized by huge buildings, beautiful wooden gates as (wooden narrow windows lattice design).this have been founded at Al-Hussein, Al-Azhar, Maidan El -Sayeda Zeinab, and Darb al-Ahamar.

It was located about four meters from the north side of el Mahlouf university .It has also a golden dome. This house is very spacious even named after the city also called the Golden Palace name and became the house of the emirate until destroyed by fire caused by Marwan II during his escape.

Egypt is a centralized state to a large extent, and therefore the capital is the center of everything in the state, all the individual wants and finds elsewhere in Egypt must find him in Cairo apart from government services provided by the state to the citizens.

Modern large shopping malls such as: City Center, City Stars, Mall of Saad Zaghloul, Talaat Harb Mall, Serag Mall, Arcadia Mall, Tiba Mall, Market Age Mall, Geneina Mall, Maadi Grand Mall and Technology Mall and the markets of the hotels such as commercial hotel Ramses Hilton and others, and there is a movie theaters throughout the city and there are movie complexes in all commercial centers in the city.

- Ancient popular markets such as: Markets of food commodities as in Al -Attaba market, Al-Abour and Road El -Farag.

-The Nilometer on Rawda