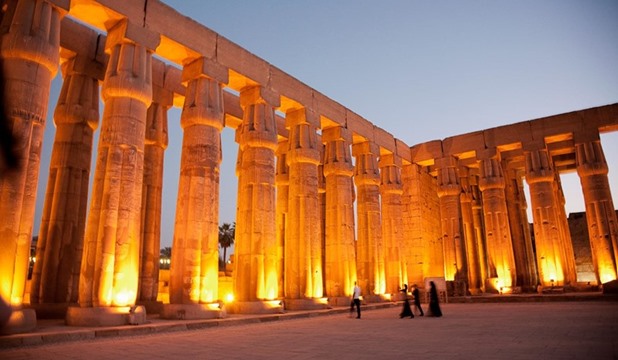 Egypt's a combination of the past and the present at the same time.  There is no place in Luxor without a trace of the greatness of the ancient Egyptians BC thousands of years ago.

It is the most important winter resort in Egypt and it is a magnet for the Pharaoh's lovers’ civilization.

The city is characterized by its unique nature, which distinguishes it from all parts of the world, as it is one of the most important tourist attractions in Egypt that comprises the most amount of ancient monuments. Walking along the ruins stepping back 3,000 years in time.

Luxor comprises many monuments, the most important of those monuments are: Luxor Temple, Karnak Temples, the City Museum, the tombs of the Valley of the Kings, queens and funerary temples, and the tombs of the nobles and other immortal monuments.

Luxor has witnessed a great interest in renovating its monuments and museums during the past years, where the third floor of the Queen Hatshepsut Temple has been opened for the first time after its restoration, and the restoration of Hor Moheb cemetery. As, it is the most important tombs of the Valley of the Kings that has been also completed. In addition to installing electronic portals for all open archaeological sites to secure them against Theft.

Luxor attracts the largest sector of incoming cultural tourism to Egypt. Also, Luxor is considered the storehouse of ancient Egyptian civilization. As, it has more than «800» archaeological sites and shrines that include the most wonderful human heritage.

Luxor (Thebes) remained the capital of Egypt until the beginning of the Sixth Pharaonic dynasty, when the capital moved to Memphis in the north.

1-Luxor Temple: This temple was erected for Amun Ra God, who used to celebrate his wedding day to his wife - death - once every year, then the procession of the God moves from the Karnak Temple on the way to the Nile to Luxor Temple, and the construction of the temple returns to the two pharaohs Amenhotep III and Ramses II.

The temple entrance begins with the edifice that has been constructed by Ramses II. It has two huge statues representing him when he was sitting. The temple is preceded by two obelisks, one of which is still standing and the other adorning the Place de la Concorde in Paris. This edifice follows the courtyard of Ramses II, which is surrounded on three sides by two rows of columns in the form of a supported Papyrus package   .

In the northeastern part, there is now the Abu Hajjaj Mosque. As, for the rest of the temple, it has been erected by Amenhotep III. It starts with a hall of huge columns with fourteen columns that divided into two rows and then we reach the large open courtyard, it comprises three two rows of columns - then we reach the halls of columns and to reach the Chamber of the Holy Boat .Alexander the Great was able to construct a small booth for him bearing his name Amenhotep III.

Finally, we reach the Holy of Holies, where the sacred statue room has four columns

It is considered the greatest worship place in history, it comprises many temples that are matchless as God of Amon temple, his God-goddess (death or mut) and their son (Khonsu) the God of the moon And, It has been known since the Arab conquest in the name of the fort in the sense of fortress.

The temple begins with a kabkash route that represents the God Amun.

Here, it symbolizes the power of fertility and development, and statues of King Ramses II has been engraved under its heads.

The temple begins with the first edifice which belongs to King Nakhtebu (family 30) the passage from there to the large courtyard, and on the right of the interior there are three cemeteries of the Trinity of Thebes from the Seti era of the second, and on the left is the temple of Ramses III.

Following this you can see the remains of the second edifice, and from it to the Great Hall of the Pillars, which contains 134 columns, and the columns in the middle of it are distinguished by their highnesses from the rest of the columns.

Then, the place leads us also to the remains of the third edifice, where the obelisk of Tuthmosis the first stands.

Then the place leads us also to the remains of the fourth edifice where we can see Hatshepsut obelisk there.

Then you can see the remains of the fifth edifice and from it to the Holy of Holies.

3-The Sacred Lake: It is located outside the main hall, where there is a large statue of a scarab from the Amenhotep king reign. It was used for cooking.

4-Sound and light program at the Karnak temple: This program narrates through the brilliant presentation the story of building this wonderful monument through word, light, tune, and music.

The show takes place twice daily and spectators witness the show from the stands prepared for that. The presentation program is presented in English, French, Arabic and German.

1-The Colossi of Memnon

Here are what has been remained of the Pharaoh Amenhotep III memorial temple.  And, the height of one reaches about 19.20 meters.

The Greeks gave this name when the northern statue was cracked and they took out a voice .They likened it to the legendary hero Memnon who was killed in the Trojan War and was calling his mother Ayus the goddess of dawn and She was crying over him every morning .

2-Tombs of the Valley of the Kings

These are the tombs that the kings and queens of the modern state have been ordered to be sculpted into the interior of the rock in this valley to be safe from the tampering of thieves.

It has been consisted of several rooms and crypts that reach the burial chamber.

The most important of these tombs: The Tutankhamen one; Ramses III tomb – Seti I; Ramses IV tomb; Amenhotep II tomb, the Horemoheb tomb; Thutmose III tomb.

The most important tombs of the Valley of the Queens: Queen Nefertari tomb, wife of Ramses II.

It has been built by Queen Hatshepsut to perform the rituals that benefit her in the other world.As, for the name of the monastery, it is a modern Arabic name given to this logic in the seventh century AD, after the Copts used this temple as their monastery.The temple consists of three escalating steps, divided by an ascending road.

It is Ramses III memorial temple, with religious and war views are in good conditions, and is still brightly colored.

Among the most important cemeteries of the region: Nobles tombs, it conveyed to us aspects of life for the nobles and their families

D-Nakht Cemetery: Its inscriptions show the simplicity of the Egyptian artist.

E- Menna Cemetery: It is associated to a person called Menna. He was a writer for royal fields during Tuthmosis IIII reign

F-Ra’s Cemetery: One of the senior statesmen during Amenhotep III reign and Akhenaten.

Inside the cemetery are inscriptions representing Akhenaten and his wife, Nefertiti.

Visitors to Luxor can see both Dandara Temple and Esna one.

On the West Bank of Qena city 60 km north of Luxor. It is one of the Greco-Roman temples for the worship of goddess Hathor. It was built by King Ptolemy III and its construction was completed by the Roman Emperors.

The ceiling of the hypo style room has an astronomic decoration with the symbolic representation of the sky.

-Muhareb Monastery, 4km from the west bank of the Nile.

-Luxor is the capital of Arab culture