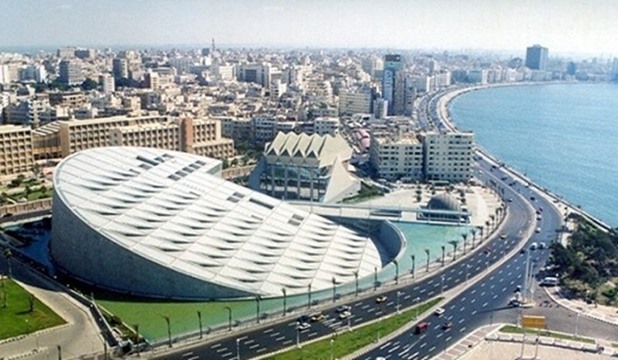 It  is a major city in northern Egypt, about 114 miles from Cairo. Covering 25 miles (40 km) east to west, Alexandria lies on the Mediterranean Sea at the western edge of the Nile River delta. Chosen by Alexander the Great as the capital of his empire, Alexandria was one of the greatest cities in the Greco-Roman world.

It was famed for its great library (which has recently been rebuilt) and the Pharos lighthouse, one of the Seven Wonders of the Ancient World.

Alexandria is a captivating tourist destination. Unlike many other areas of Egypt, its cultural heritage, climate of warm summers, mild winters and pleasingly warm spring and autumn months and its cosmopolitan atmosphere give it a Mediterranean feel. Alexandria is known as the ‘Pearl of the Mediterranean’

Alexandria’s most prominent landmarks as:

Ras el Soda Temple: The temple was found at Ras es-Soda in 1936, on the way leading to Abu Kir. It dates back to the 2nd and 3rd centuries CE. It consists of a staircase which leads to a platform with four Ionic columns. In the middle of the platform stood a carved foot on a pedestal with Greek inscriptions showing that Isidorus, charioteer, fell down and broke his leg; when he recovered he built this temple in gratitude to the goddess Isis and other gods for his recovery. At the end of the platform was a stand. On this stand existed statues of Isis, Harpocrates, Herm Anubis and Osiris-Canopus.

Al-Montazah Palace: Built on low plateau east of Alexandria and overlooking a beautiful beach, amid about 370 feddans of gardens and woods, the Palace comprises a number of buildings, the most important being Al-Haramlek, the summer residence of the former royal family, Palestine Hotel, the tourist hotel, was built in the gardens, while Al-Haramlek was turned into a luxury hotel.

The Montazah Palace Gardens: These gardens cover an area of 370 feddans and contain trees, palms, and flowers. There are also a museum, several natural bays and beaches, as well as complete tourist centre, a hotel, restaurants, bungalows and a children's park of 4.5 feddans area.

The Antoniadis Gardens: It contains beautifully arranged trees and flowers, as well as several Grecko statues in marble and the Antoniadis palace.

Roman Theater: Located in Kom Deka. It is the only Roman theater in Egypt. This building has been set up at the beginning of the fourth century AD.

Alexandria Modern Library: The Library of Alexandria also known as the Bibliotheca Alexandrina, the library is one of the city's greatest attractions. The original library was once the largest in the world. It is thought to have been founded at the beginning of the 3rd century BC during the reign of Ptolemy II of Egypt. The present Bibliotheca Alexandrina was opened in 2003 near the site of the old library. It is designed in the shape of the sun in front of the sea with a reference to the Sun of Knowledge rising from the Mediterranean Sea.

Alexandria University has launched in 1972, the revival of the Bibliotheca Alexandrina project, UNESCO has issued   its first international appeal in 1987 to support the project. Thus, the foundation stone has been commanded to the ancient Alexandria library.

Presidential Decree No. 1 of 2001 has been issued. Alexandria library considered as legal personality, founded in Alexandria governorate and follow Mr. President of the Republic.

The library floor reaches 11 floor, including 4 of them below the surface of the Earth and 7 above, and the building height reaches 44 meters. The library also has 10,000 original rare book and 250 other facsimile (replica).

The library has a rare 2600 map. 70 of them were a map of Alexandria.  The Scientific messages at the library reaches 15,000 one. The library included at the opening of about 200 thousand volumes and 1,500 periodicals.

It is also the first digital library in the twenty-first century that includes the Egyptian cultural and human heritage. It considered as well a center for study and dialogue.

It has also a library that can accommodate more than eight million books. It comprised a large sum of book in various languages as: Arabic, English, German, Italian, Spanish and other rare languages ​​

The Alexandria University Conference Center: Alexandria Cultural Centre, in Al-Silsilah, over an area of 42,000 m2, comprises a conference centre, the Alexandria library, an open courtyard and a garage.

The conference centre, on an area of 5,000 m2, has an overall seating capacity of 2672.There is large cafeteria to serve the main auditorium overlooking the sea. A smaller cafeteria caters to the other smaller halls.

The Main Auditorium, 1700 seats, is a large hall without any pillars to obstruct the view. It is a multi-purpose facility with a fully-equipped stage that allows for holding international and national conferences and for staging plays, concerts, ballets, and operas. There are six separate booths equipped for simultaneous interpretation in six languages.

Three smaller halls: The first 400 seats, and the second and third, 286 each. Five separate booths for simultaneous interpretation are attached to each hall.

All the halls are equipped with audio-visual aids, closed-circuit TV, air-conditioning, and direct-dial telephone services. Other facilities for information, security, and parking areas are also available

Attarine market was one of the most famous markets of this ancient city. It is specialized with the sale of all types of spices, legumes, seeds, grains, and then expanded its activities to include all other goods from clothes , laptops, shoes and other, and there are old markets retains characteristics such as  textile  market or (Thread ) which handles the sale of all types of yarn and all of the art supplies embroidery , knitting,Zanat el Sitat street in it sells all the supplies of women as does the Moroccan market, and others.

Alexandria beaches are considered the most prominent landmarks, where the city has been well known by its greatest summer resorts and beaches. Agami Beach, Miami and Mamoura are one of the most famous beaches there. There are also many hotels and summer housing units there.