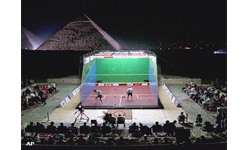 Squash was known in London in the mid of the 18th century and it was used to be played with standard rackets. After being quickly spread, squash was turned in 1890 to be an independent game.
In 1850, squash trespassed the boundaries of France and America to be transferred afterwards throughout the globe as it reached India, Pakistan and Egypt.
The first squash championship was recorded to be held in 1920.
Rules of the game:
This game has been considered among Tennis games where two players compete using two rackets, 68.6 cm and weighs 250 gm each; whereas the soft ball weighs 25 gm and with a 4-cm width. 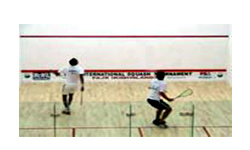 The wooden-floor squash court measures 9.75 meter in length and its width measures 4.60 meter. The game starts by hitting the ball against the front wall provided that it must be 43.2 cm up the ground controlled by a service line of 5 cm width. The ball should not touch the line, otherwise, it would be a score for the opponent.
It is originally played by two players and it could be played by four players that each two represent a team.
Swiftness and alertness are the main characteristics of the squash game  as it requires high dexterity, smartness, prompt decision-making as well as body strength.
Famous squash players:
Among the famous squash players are:
Jahangir Khan who is a former World No. 1 professional squash player from Pakistan, who is considered by many to be the greatest player in the history of the game. During his career he won the World Open six times and the British Open a record ten times. Between 1981 and 1986, he was unbeaten in competitive play for five years. During that time he won 555 matches consecutively. This was not only the longest winning streak in squash history, but also one of longest unbeaten runs by any athlete in top-level professional sport.
Ahmed Barada who is a former professional squash player from Egypt. He finished runner-up at the World Open in 1999 (losing in the final to Peter Nicol). His career-high world ranking was World No. 2, which he reached in December 1998.
Barada won the World Junior Open squash title in 1994, as well as 4 British Junior Open titles in 1991-94 (1 under-14, 2 under-16, and 1 under-19). He shot to stardom on the professional circuit in 1996, when he became the first wildcard player ever to reach the final of a Professional Squash Association Super Series event, finishing runner-up at the inaugural Al-Abram International Championship in Cairo.
In August 2001, Barada had officially announced his retirement from the game in August 2001.