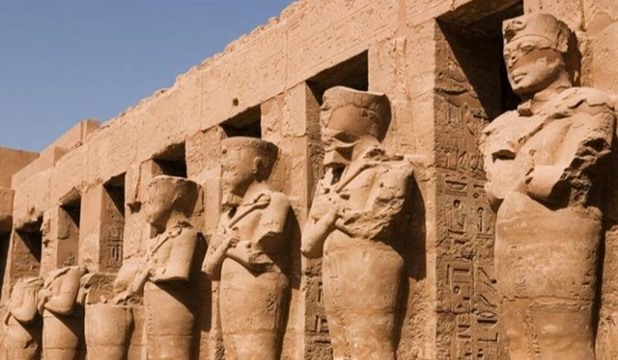 It is an amazing complex of beautiful temples. It is also matchless one .As, Karnak includes the temples of the god Amun, his wife, the goddess "Mut" and her son, the god "Khonsu".

Its construction began at the Middle Kingdom (about 2000 BC). During the era of the modern state to which King "Tutankhamun" and King "Ramses II" belonged.

A luxurious temple was erected on the ruins of this temple, befitting the greatness of the huge Egyptian empire.

And every king would add something new to the temple so that to be closer to the Gods; for immortality, and to obtain great fame among the people.

The Great Temple of Amun-Ra

It is a large courtyard with a row of columns in the form of papyrus on both sides. There are also three compartments in the northwest corner of this courtyard, which were prepared to house the sacred vessels of the Thebes Trinity, built by King Seti I of the Nineteenth Dynasty. The walls of these compartments are decorated with reliefs representing the sacred vessels.

Temple of "Ramses III" at Karnak

Ramses III built it to house the sacred ships. This temple is considered a model of the complete Egyptian temple. It begins with a great edifice adorned with two magnificent statues of the king from the outside. It is followed from the inside by the open courtyard, which is bordered by the Bua'ik (plural weeping) to the east and west. The king appears on the pillars in the form of Osiris.

This temple consists of a pylon inscribed by the priest "Bi Najm", the eighth king of the twenty-first dynasty. This is followed by a courtyard with columns in the form of papyrus, and its crowns are in the form of papyrus buds as well, and this is followed by a vestibule with twelve columns that leads to the lobby of the columns, whose walls appear inscriptions from the era of "Ramses XI", tenth kings of the twentieth dynasty, and "Harihor" who was his guardian. Finally, we reach the sacred barge of Khonsu, and the dark niches around it.

It comprises the "Mihrab", or "Holy of Holies", and contains inscriptions and scenes from the era of "Ramses IV". Behind the "mihrab" stands a small courtyard with four columns, connected to it by seven small rooms from the era of "Ramses III" and "Fourth". Straight. The colors of the scenes in the two rooms to the right are still vivid. The next room was dedicated to them to worship Osiris, who is seen lying on his bed, with Isis and Nephthys weeping over him.

The sun falls perpendicular at the Karnak Temple once a year, specifically on December 21, the day of the winter solstice, i.e. with the onset of winter.

This event reveals the ability of the pharaohs to calculate an astronomical geometrical movement of the earth around the sun, and then build the temple according to these calculations.It is worth noting that the sun falls perpendicular at Deir el-Bahari and Qasr Qarun at the same time (December 21) in an astronomical phenomenon that occurs once a year.