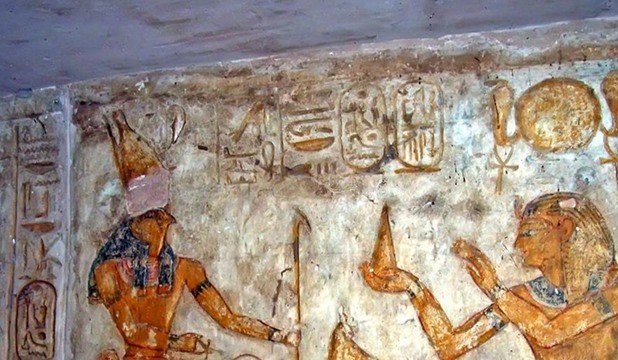 Abu Simbel Temple is the title of the ancient Egyptian  that are genius in architecture and construction. It is one of the largest and greatest temples in Egypt. It is divided into two temples:

Its’ construction took about 24 years .It was dedicated to the Gods Amun; Shepherd Harakhty; Ptah and also to Ramses II.

It is engraved into a giant rock.  There are four statues at the entrance of the temple each of which is 20 meters high, to decorate the facade, which is 35 meters wide.

After this splendid entrance, there are eight other statues, 10 meters high, and you will find clear inscriptions that tell of Kadesh battle and Ramses II victory.

As for the interior of the temple, it consists of a group of rooms; corridors and on the walls you see inscriptions and pictures of Ramses II and many Pharaonic deities.

It is also called the Temple of Hathor and Nefertari. It was dedicated to the goddess Hathor; the goddess of love; beauty; sky; and Ramses II and his wife Nefertari, which is 150 meters from the largest temple.

There are six statues in its façade; four of them of Ramses and the others of his wife, Queen Nefertiti.

This temple is considered the second one in history to be dedicated to a Queen. The first time was dedicated to Queen Nefertiti, and it was built for her by King Akhenaten.

The sand covered the temples of Abu Simbel with the passage of time. The sands covered the height of the large statues at the entrance .It  also covered its statues' knees.

The temple was forgotten until 1813 when it was discovered by the Swiss GL Bochardt and he used the Italian explorer Giovanni Pelonzi to discover and enter the temple, but they failed, and after years Pelonzi returned to Egypt in 1817 and succeeded in this time is to enter the temple for the first time after hundreds of years, and it is said that the one who guided the explorers to these temples in the middle of the quicks was a young boy called Abu Simbel, and the temples were named after him and a lineage for his merit in this discovery.

The temples were completely dismantled and moved in 1964 by the Egyptian government and UNESCO. It has been built  on a high plateau 60 meters high, in order to save them from drowning after Lake Nasser was formed upon the completion of the construction of the High Dam.

The most impressive and truly evidence  that shows  pharaohs genius is a phenomenon that occurs twice a year, where the sun rays enter from the front of the temple and through a narrow opening  falls perpendicular to the face of the statue of Ramses II inside his private room in the depth of the temple once on the anniversary of his birth and once on the anniversary of his accession to power and this strange phenomenon was accurate On February 21 and October 21, before moving the temples in 1964, but after moving it took place on February 22 and October 22, due to the change in latitude and longitude as a result of moving the temple from its original place 120 meters west and 60 meters high.

The astrologic explanation of the phenomenon

It is known that as a result of the motion of the earth around the sun in a semi-circular orbit, there is an apparent motion of the sun through what is called the celestial zodiac circle that is a circle declines by 23.5° on what is called the celestial equator. So, the position of the sunrise varies daily on the horizon in an interval lies between –23.5° and 23.5° from the real east which the sun rises from only on 21st of March and 23rd of September of the year (they are called the equinoxes or the beginning of the Spring and Autumn seasons respectively).

In the Spring and the Autumn seasons, the sun rises from a position declines from the east by some degrees north. This declination reaches its maximum on 21st of June (the beginning of the summer season) and will be 23.5° north.

On the other hand, in the autumn and winter seasons, the sun raises from a position declines from the east by some degrees south. This declination reaches its maximum on 21st of December (the beginning of the winter season) and will be 23.5° south. Accordingly, if we have a long path directed to the east or declined to it by an angle 27.5° north or south as a maximum and closed from the west, the sunlight will illuminate the closed wall twice a year.

So, it is normal to find the sunlight enters Abu Simbel temple and hit the four statues in the sacrarium perpendicularly twice a year because its axis declines on the real east by an angle of 10.5° south.

But the miracle appears here if the two days of illumination are selected and determined before the sculpture process. This is because it needs a complete knowledge of the astronomy basis and many calculations to determine the declination of the axis of the temple from the real east. Also, the miracle appears in the perfect straight axis along a distance of 65 meters cut in the rock.

This phenomenon was discovered in 1874, when the explorer "Amelia Edwards" and her accompanying team monitored and recorded this phenomenon in her book published in 1899 (A Thousand Miles Above the Nile), which stated, "The statues of the Holy of Holies become of great influence and are surrounded by a beautiful aura of prestige and dignity at sunrise. The sun and its rays fall on it.”