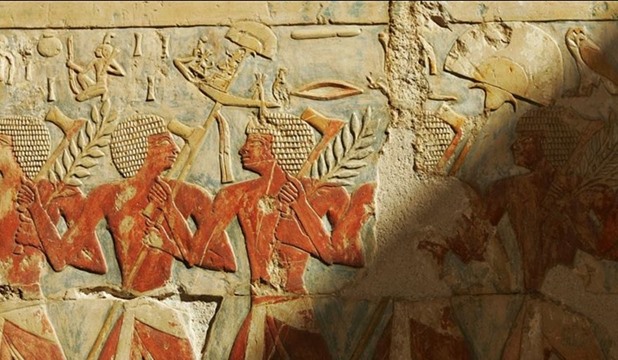 Hatshepsut temple is located at the bottom of a high rocky slope near the western bank of the Nile. The temple is also known as Deir el-Bahari. It is dedicated to the worship of Amun-Ra, the sun god. This temple was designed by an engineer named Senimot. The temple is unique in its design as it is similar to the classical building designs.

You can notice the temple's long terrace filled with rows of columns, some 97 feet high, the turrets, courtyards, and the hall with a colonnaded ceiling. Inside the temple, you can see the Hall of the Sun, the small temple and the altar.

The inscriptions on the walls of the temple express the story of Queen Hatshepsut birth story and her trade trips to Punt, now known as the modern state of Somalia or the Arabian Peninsula.

The Temple of Hatshepsut consists of three floors, as well as a large number of statues made entirely of limestone for a number of deities, such as statues of the god Osiris and Queen Hatshepsut.

Mihrab of Hatshepsut and Thutmose I

These two mihrabs are among the main components of the Hatshepsut’s temple and the largest of them as well. In front of the wall opposite the entrance to the mihrab there is a door made of granite.

The sanctuary consists of 15 large and open halls with a staircase that leads to a table of aids, which is one of the very important archaeological discoveries.

It is the main sanctuary of the god Amun-Ra and in this room there are four statues of Hatshepsut, missing their head, but there are now only two statues

It is a very small room, but it has inscriptions stating how donations were made to the gods in general in the era of the ancient Egyptians. There is also a drawing on the back wall of the mihrab showing Amun-Ra embracing Tuthmosis II.

Phenomenon of the sun falling perpendicular to the temple

The sun falls perpendicular to the temple of Deir el-Bahari once a year, specifically on December 21, the day of the winter solstice, i.e. with the onset of winter.

This event reveals the ability of the pharaohs to calculate an astronomical geometrical movement of the earth around the sun, and then the temple has been built according to these calculations.

It is worth noting that the sun  falls perpendicular to the Karnak Temple and Qasr Qarun at the same time (December 21) in an astronomical phenomenon that occurs once a year.