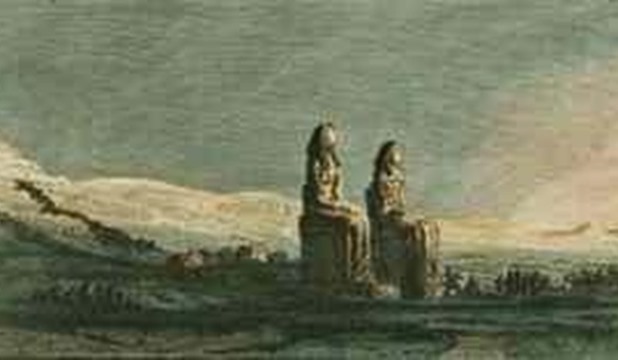 In the fourteenth century, a temple was built in the western region of Thebes, Egypt, in memory of King “Amenhotep III,”. He was one of the kings of the Eighteenth Dynasty, which is considered the most powerful family that ruled Egypt in ancient history.

Unfortunately, no trace of the temple remained except for two statues, which were called the Colossi of Memnon, due to their large size, as each of them reaches a height of 19.20 meters. They are all that remains of the temple commemorating Pharaoh Amenhotep III.

The sun   passes over on the two paintings that represent the statues of Amun Ra and Montu in the temple known as the Roman (ISIS Temple – Shelwit) at the West Bank area in Luxor.

The temple was built on the axis of the sun to receive the sun twice a year in 23rd October, and 20 of February.

Deir el-Shelwit temple is the eighth archaeological site in which the sun falls perpendicular to the Holy of Holies, in confirmation of the leadership of the ancient Egyptians in astronomy in the whole world thousands of years ago.

It is noteworthy that Deir el-Shelwit temple, located south of Mount Memnon; 4 km south of the famous Medinet Habu temples in western Luxor.

The temple was dedicated to the worship of Isis, the ancient Egyptian goddess of motherhood and childhood. This temple is known to tourists as the Small Temple of Isis.