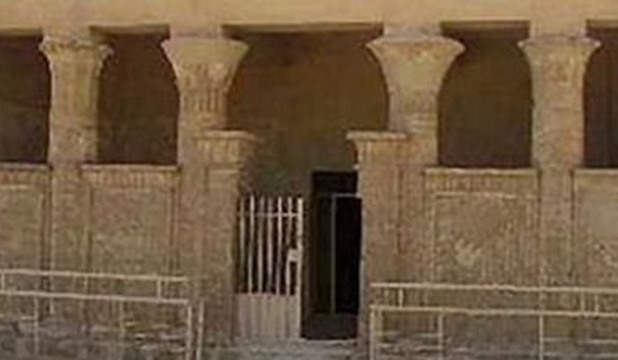 There was nothing left from this old city that was located 8 km north of Malawi near the Ashmounin except some remnants of the Middle and New Kingdom periods, and the ruins of a Roman square with a basilica dating back to the early times of Christianity.

This city was a center for the worship of the god "Tut" or "Thoth", the god of wisdom for the ancient Egyptians in the past. Thoth was also a god of the moon and the god who measures time, besides being the lord of magic and wisdom.

This cemetery dates back to the Ptolemaic era .It is a cemetery and prayer room (or a small temple) as well.

Petusris the high priest of the god Thoth. The tomb  that bearing  his name has a vestibule with columns; it also contains images in which  both cultures the ancient and the Grecian  one were mixed out in it . We can see also scenes of agricultural works that have been drawn in Egyptian traditional way, but the people who appear in these scenes have been wearing Grecian clothes.

Tuna al-Jabal is located 7 km west of Hermopolis. There are the baboons tombs (as well as ibis and their eggs), which are the sacred animals of the god Thoth. Most of the mummification operations of these animals and birds took place in the Ptolemaic and Roman eras. In the past, "Tuna al-Jabal bordered "Akhitatin city which was the capital of the country for a short period during Akhenaten reign .It was also a cemetery for Hermopolis the neighboring city.